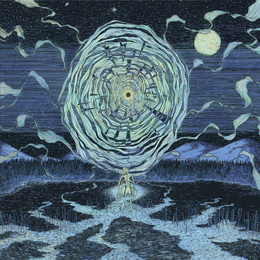 After an EP and two full lengths, Syndicate Of lethargy (2008) and Odes Of The Occult (2011) (and an EP as well as a very interesting split too, not to forget), Oslo, Norway-based Execration return with their next opus, Morbid Dimensions. It’s a one-hour opus that keeps the listener attentive from beginning to end. As from opener Cosmic Mausoleum, it’s stroking how organic it sounds to mingle the vast tradition of the Old School with progressive elements from the Modern Times. The stuff is melodic yet, especially, very technical in its execution. No, not of the avant-garde or exaggerated eccentric kind, yet the performance is simply highly technical done. In general most parts are pounding, firm and mid-tempo based, but all contrasts and extremes appear as well: faster, slamming and energetic assaults at the one hand, and slow, ultra-heavy ones at the other. What strikes is the cohesion, and then I am referring to two things. At the one hand it’s the cohesion in between the tracks, offering a global picture of Morbid Dimensions. That of course has to do with the many years of experience. But secondly I am also referring to the interaction in between the members. Since they are playing within the very same constellation since quite some time (guitar players / vocalists Jorgen Maristuen and Chris Johansen, and drummer Cato Syversrud are original members since the band was formed in 2004, and bass player Jonas Helgemo joined in 2006, meaning that each official record has been created by this quartet), it might define the reason of this coherence. Each track, by the way, is of a great quality – no fillers on this album. I do not think they completely stand out; there is no cult-classic present either – but the high quality is a constant throughout the whole album.

Of course it is interesting to experience two vocalists. One ‘voice’ (but I do not know who of both vocalists is which) reminds me to the throaty growls of Martin Van Drunen, the other one is extremely low and belly-ish).

This stuff will be appreciated by everyone who can enjoy bands like Immolation, Asphyx, Cadaver, Obliteration, Morgoth, Autopsy, Ulcerate etc.