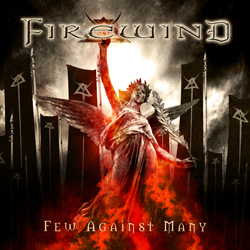 I already liked the previous Firewind album ‘Days Of +Defiance’, and upon reflection, I should have rated that album much higher than the meager 80/100 I gave it.  And to be honest, this new album, their seventh so far, is just as good, or even better.

It’s a shame really, that this band isn’t more widely known, because this band is G.O.O.D.  They combine fantastic guitar work, with great keyboards – although in my opinion a bit sparse – and in the person of Apollo Papathanasio they have a fantastic vocalist, who can adapt his voice to bring out the best of it in each and every song.

There might be others however, who will not share my opinion, and will say that Firewind could have done better, and are not very original on this album.  I’m not the man to say they are wrong, but is this fair ?  How many other band out there are there who regularly bring out new albums, without riskin’ it all to create a new sound ?