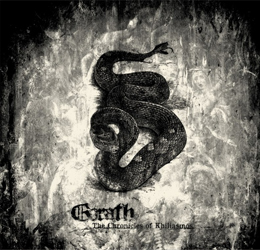 I do follow this Belgian act as from the very beginning and I do appreciate the permanent positive evolution they made. In the early years, Gorath played decent yet somewhat faceless (Black) Metal, but by each recording they went stronger and more convincing. The continuously perfecting totality made both last Gorath-albums, MXCII and Apokalypsis (both reviews still available within the archives-section), make the top of my end year’s lists in respectively 2010 and 2011, and now it’s time to praise the Horned One once again.

But… time to grieve and mourn, because: this will be the last thing ever done by Filip Dupont and his crew. Gorath will end all activities in order to have the members concentrate on their other activities, both musically and personally.

The Chronicles Of Khiliasmos lasts for thirty eight minutes and consists of three pieces, respectively called Khiliasmos I, II and III. And for sure it’s another masterpiece, going for all three hymns of Dark Art.

Slowly battering and heavily pounding eruptions of grimmest and bleakest Funeral / Post-Black grandeur, exhaling an atmosphere more dense and suffocating than ever before, this time with a most sludgy, almost droning approach, torturing and, at the same time, caressing man’s masochistic eardrums with sardonic pleasure… A highlight to end with, and therefore my eternal gratitude!

For fans of: Panchrysia, Khold, Thorns, Hellhammer, Blut Aus Nord, Tombs, Deathspell Omega, Zatokrev and (most of) the ConSouling Sounds-roster…