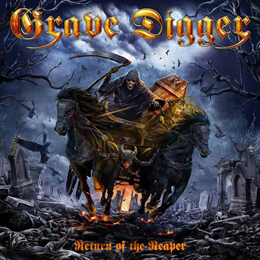 As you are used to from ‘Grave Digger’, they do the same tricks for years, and this album is no different. For those who still dig ‘Grave Digger’ after 30 years, even after the lesser albums, then the new album (Return Of The Reaper) is a big party album for the fans. After the intro the heavy metal violence bursts out of its banks. ‘Hell Funeral’ is a great song with all the elements they used to get their recognition as German rockers, the dark rasping vocals and the heavy guitar riffs that we are accustomed to.

The songs that follow are a real feast for the true fans of ‘Grave Digger’. There is a lot of material from previous albums that they use in their new album but that’s what made ‘Grave Digger’ famous. Originality was never their strongest point, but the lyrics and choruses stay in your head. The song that stands out the most is ‘Satan’s Host’ it could be a song of ‘Motörhead’ if you didn’t know. Bad stuff can’t be found on this record, ‘Return Of The Reaper’ belongs to the ‘better work’. but they cannot surpass their ‘Clash Of The Gods’.