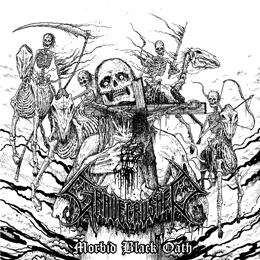 One of the many excellent releases on Spanish label Xtreem Music, run by Christ Denied / Avulsed’s Dave Rotten, is the EP Morbid Black Oath by Hungarian five-piece Gravecrusher, an experienced act that was formed in 2012 (the members are or were involved with the likes of Necrosodomy, Nebron [one of my faves!] or Goblin Gore). This band released a demo in 2012, which was sort of re-done on a split with Necrosodomy, and those songs re-appear on this EP too.

Morbid Black Oath consists of seven pretty short tracks (the total running time isn’t but twenty four minutes), but that does not influence the result, the quality, the professional approach. On the contrary. Despite being from Hungary, they absorbed lots of influential elements from the Scandinavian Death Metal scene anno late eighties – early nineties (once again…). Grave and Unleashed, Abhorrence and Purtenance, Molested and Mortem (three duo’s from the Swedish, Finnish and Norwegian hemisphere respectively, in order not to discriminate any of them), mercilessly spiced with details from the initial Tampa-scene too. It is little grooving and trashing, intense and energetic, and primal in sound and execution.