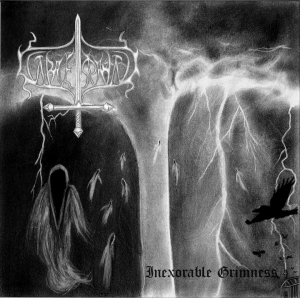 ~~When he was doing his military duties in 2004 for the fabulous (small dose of sarcasm included) American army in South Korea, Seth ‘Rellik’ Brooke decided to start Gravespawn as a solo-outfit, to canalise his misanthropic ideas and thoughts. Before he was in Lythos, but since his partners in crime from that band weren’t with him… After a first demo, he returned to California, joining forces with bass player Andrew ‘Advorsus’ Inman, who was part of the Lythos line-up too. Soon after a second demo followed, but then things went silent. In 2009 there was another demonstrational recording, and once again only silence remained afterwards. Until 2012, which was the year that brought us the first studio full length album by Gravespawn, Woe To The Conquered (self-released). Another couple of years of relative silence appeared, and in 2015 the band was part of a split with Indesiderium, an outfit that includes guitar player Atrum Abbas, who joined Gravespawn in 2009 (shortly before the recording of that third demo). Gravespawn’s part of the split consisted of two tracks from that debut album. One of these songs, as well as another one from that album (and a live track as bonus), made it to another split, 2016’s Infirmos Vocat Deus Fidei, a collaboration that also includes Wormreich, Vesterian and Diabolus Amator. It was released via two splendid Black Metal labels, Black Plague Records and Symbol Of Domination Productions. Even though it’s little older than the release I am reviewing right now, I will surely come back to the split quite soon.

Anyway, since Gravespawn did sign to Symbol Of Domination Productions for that split, they decided to release their newest epos once again via this sub-label of Russia’s Satanath Records, this time in a joint venture with Seth’s own label Vae Victis Productions. Seth, now acting under the name of Reaver, took care of the final mix too, and he was helped out by Advorsus, who returned to this line-up, and Verigo, who joined in 2009. The latter is in Vesterian as well (besides some other bands), which was one of the other bands on Infirmos Vocat Deus Fidei. The drum parts were done by session studio musician Jackson Ferris, whom you might know from his activities in bands like Verräter, Stonehaven and Lightning Swords Of Death.

Inexorable Grimness lasts for thirty-three minutes and gets released in an edition of 500 copies, including an eight-page booklet. It stands for Grim Ancient Black Metal, and that sort of covers the reality. Grim it is, Black Metal it is, and ‘ancient’, well there surely is a very convinced Second Wave attitude as driving force. The five-track EP opens with Old Dragon’s Domain, which starts with a very nice introduction, balancing in between the heroism of so-called Dungeon Synth Music, and the epic bravery of an act like Summoning. After about one minute and something, Gravespawn transforms into a very icy and misanthropic, yet also mystic form of Traditional Black Metal. I did mention the Second Wave, and that’s a very correct given for sure. Riff-wise, for example, and everything that concerns melody and rhythm, immodestly breathe a glorious Nordic atmosphere. It means a certain lack of originality. Indeed, the changes in tempo and structure, the execution and instrumentation, the sphere and so on – quite everything reeks of heard-it-before. But hey, you don’t hear me complaining, for the result, once again, is quite satisfying.

There are a couple of great things going on. In general, all tracks are decently written and performed (great drummer for sure – the stuff is not necessarily that blasting fast at all, but the drum salvos add a huge dose of dynamism, which I for myself do appreciate enormously), but I have to refer to a couple of things. The vocals, for instance, are fine to listen too; somewhat gurgling, somewhat soar and raspy, yet deeply penetrating the soul. I also adore the epic spirit, which gets translated in the guitar melodies especially, as well as some harmonic chants. But it’s part of the general atmosphere too, subtly touchable whole of the time. But quite characteristic are the keyboards, which do play a very important role. It’s not an instrument permanently present, but in quite a modest way it does find its way to define the stubborn identity of this band. This fact too is, to my subjective opinion, a surplus (though I never dislike the use of keyboards within atmospheric Black Metal passages).