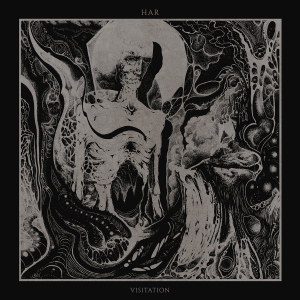 Har are a young project but consisting of experienced musicians from Israel. The members of this Tel Aviv based act were or are in other notorious bands such as Mortuus Umbra, Witchcraft Sadomizer, Mocous Scrotum (hey guys, are you still alive?), Sonne Adam and so on. The band independently released a first EP in 2014, called Baal Ha’ov (there was a tape-edition too, quite limited, via Orgasmatron Records), and then everything seemed to fade away in total silence. Until now. With some new members, Har recorded a new mini-album, a three-tracker, called Visitation. It was initially released via the band’s own Bandcamp page on January 1st 2018, and after they signed to Blood Harvest Records, this material is available as well on vinyl (and compact disc?). there are 300 ‘regular’ copies (black vinyl), 100 on grey vinyl, and another 100 mixed grey-black. It’s part of a young series by this Swedish label of ‘short-length assaults’; I will write and publish some more of those nasty sonic attacks soon.

A first thing that strikes me, compared to the former EP, is the average length of the tracks. Baal Ha’ov was a collection of short and fierce noise-eruptions. This new EP, on the contrary, consists of three lengthier compositions, lasting for five up to almost seven minutes (eighteen minutes in total).

A second thing is the evolution within the performance. The debut release stood for ‘intuitive Black Metal’ especially. I did (and still do) adore that nasty and devastating recording a lot for sure, if only for the right-in-your-face and minimal approach. But this is quite impressive too, believe me. That is a clear thing after just half a minute. Opening track A Shadow Henesis starts with an oriental melody and the addition of darkening sounds (distant bells at night and haunting voices), soon joined by cymbals and guitars, ominous, angry and building up to a climax. That climax starts at 2:00, when a sudden sonic assault takes over the introducing phase. In a so-called Metal Of Death manner, this sonic orgy canalises some nasty edges from the Morbid Death, Doom and Black Metal scene, overcrossing the timelessness of the scenes. In an uncomfortable yet ingenious way, Har are able to create lengthier songs, which are permanently changing in structure, melody and tempo. It’s turbulent and chaotic, and at the same time well-structured and fundamentally perfected. The result is like a ‘full’ sound experience, an overpowering eardrum attack, combative and confident, which you surely find back in the frenzy outbursts which are part of From The Blood Of A Whirling Dagger or the grandiose piece Conjure The Black Flame too, with its majestic grand finale.

Another element might be the sound quality, which is not that different from the first recording. Raw and unpolished, but nicely presenting all individual elements, with a rawness that is simply necessary. Okay, maybe there might have been little more ‘elegance’ in the guitar sound, and some more focus on bass lines and rhythm guitars - though there is not a reason to complain, for the result comes close to the ideal climax for this specific kind of aural torture / pleasure.