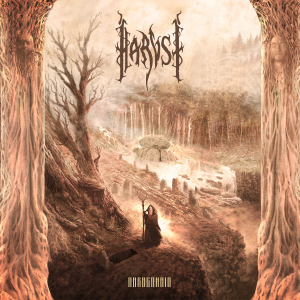 Sometimes you have one or another label that signs a new band because they believe in that band’s craft. Well, that’s exactly what happened with Harvst. Harvst is a duo, consisting of vocalist / lyricist (and visual artist) Dornh and multi-instrumentalist / producer Wynthar (you might know him as well as the guy behind Frostreich). They did write and record a handful of tracks, of which six got eventually gathered under the moniker Narbenhein. At that time, the mostly underestimated yet actually interesting label Pesttanz Klangschmiede appeared (in a partnership with the very young yet promising label Schattenpfade) in order to have this first Harvst album released.

So, at the very end of last year, Schattenpfade and Pesttanz Klangschmiede released Narbenhein in a digipack edition, which comes, I think, with very decent cover artwork in a sober yet intriguing color setting (Dornh works under the Cursed Hand Art moniker, when it comes to his visual creations). That physical edition is limited to 300 copies, which are hand-numbered (cardboard sleeve without inlay or booklet).

Narbenhain gathers six quite lengthy compositions, lasting from six to eleven minutes, with a duration of forty-eight minutes. It brings a very epic form of melodic and Pagan / Viking oriented Black Metal with a universal spirit. The better part is vocal and guitar oriented (I’ll come back to the sound quality soon, to stipulate the importance of all other instruments too). The guitar basics are very melodious and harmonious, with tremolo and twin riffing at the one hand, and several intriguing soloing too. And the finest thing is that the whole does not deal with an attitude à la ‘listen what a skilled guitarist that I am’, yet rather ‘experience how great we are as a supreme project. Damn yeah, the guitar parts are of huge importance, yet without arrogance for sure. Anyway, what is of importance too is the typifying melodic structure, which might remind you of some (Nordic) bands from the Eighties. I think it wouldn’t be that stupid to refer to an act like Kampfar, Falkenbach or earlier Hades (Almighty), for example. No, Harvst do not sound like a cheap copycat of these acts - it’s just a direction, an idea I wanted to refer to.

I did mention the importance of the vocals too in the former paragraph. Indeed, they are, also like many Pagan Black bands. The main vocals are quite harsh, rough and combative. Dornh’s throat is raspy and malicious for sure. But there are a lot of melodic, harmonic choirs / chants too, and a couple of low-tuned growls, melodious singing or wretched yells as well. Those epic choirlike chants I mentioned, they too remind me of, for example, higher-mentioned Falkenbach - sometimes even Bathorian in essence (!) - and that isn’t but another surplus.

I do appreciate the crafted skills of both song writing and execution, as well as the variety in structure (with more traditional and contemporary parts, or a focus that refers to Pagan / Viking epic at the one hand, or rather orthodox blackened aggression at the other) and the diversification in tempo (mainly mid- tempo / up-tempo, with a couple of slower excerpts and several blasting outbursts). All this besides the huge variation, as mention, when talking about the vocals or approach.

The production and mix of this album are simply excellent. It’s very decently recorded, with a rough-edged attitude without surgical exaggeration. Yet above all, every single detail is so ingeniously mixed into the whole sonic experience. The bass lines, the rhythm guitars, the backing vocals, the (splendid!) percussion; Narbenhain is simply top-notch when talking about the sound quality. It strengthens the nostalgic yet persuasive attitude and approach of this album with conviction and determination.

Narbenhain can’t be considered a renewing album (at all), but that is not necessary. Within its genre, it must be one of the most overwhelming, impressive and convincing ones I have heard in many years. Being able to pay tribute to the old school with these crafted song writing skills and faultless performance, and somehow adding a personal touch, in combination with a splendid sound quality and glorious, victorious atmosphere, well, I cannot but recommend it to fans of, well, let’s say: Bathory’s Viking era, Falkenbach, Moonsorrow, Kampfar, Windir / Vreid, you know, that sort of sonic pride…