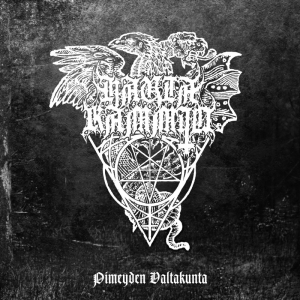 Hautakammio are a Finnish band which includes Aki ‘Grim666’ Klemm, known from acts like Lathspell, Grimirg, Order Of The White Hand or Oath, amongst several others. It’s the same guy behind the Patologian Laboratorio studio, and the person who runs the Patologian Laboratorio Productions-label, which focuses on Aki's own projects especially. Look out for a couple of upcoming reviews from that label, coming up soon!

This easily brings me to this album, Pimeyden Valtakunta, for it has initially been released on that small and independent label in September 2014. Because of the worthy quality, our own Immortal Frost Productions are so kind to re-issue this material with a better, more professional and international distribution (though it comes with ‘only’ six tracks out of the original eight).

Pimeyden Valtakunta, at least this edition, lasts for just over half an hour and what this material stands for is rather ‘common’. I admit that this introduction does not sound that positive, but actually it is just like that and nothing more. Although, ‘nothing more’ isn’t totally correct, because of the high quality of both song writing and execution.

As a matter of fact, Hautakammio bring traditional Underground Black Metal, being mainly very fast, raw and uncompromising, with eye for detail, i.e. classical structures and epic melodies. It might be of the ‘heard-it-before’ kind for sure, but once again the result is extremely pleasant, I think. The stuff does not stand out, for I’ve heard such satisfying quality before. Yet at the other hand, I’ve heard worse stuff too, which is a surplus.

The vocals of Nagh are breathing sulphur and acid; the kind of ‘lungs from Hell’ that aren’t that uncommon in Finland at all. I think they’re outstanding, though that’s my personal opinion. The rhythm section lacks of innovation / invention, but with the aim to ‘support’ or strengthen the guitar leads and vocals, they surely succeed to lift the latter up. And the melodic guitar lines are, as mentioned before, pretty epic in performance (read: not of the so-called Nordic kind, yet rather of the asphyxiating one).

The sound quality, and that’s something I just need to mention, is beneath acceptance. That surely is a pity. Okay, this kind of material is allergic to a polished production, evidently, but the result is too dense, too misty, too dull. So, this fact, as well as the lack of adding something own-faced (I’m impatiently waiting for something memorable), are minor elements that might be disappointing. At the other hand, the general atmosphere and the compositions themselves do contain about everything that this kind of stuff needs, which is a positive element in addition to the disappointing aspects. This duality does influence my final score, for what this one is worth, of course. But fans of rough-edged Finnish noise need to pay attention!