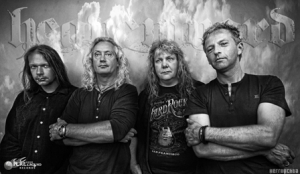 Heavenward was founded in 1986. The original line up consisted of Oliver Müller (Bass), Achim Schneider (Guitar), Wolfgang Jansen (Vocals) and Thomas Stauch (Drums), who played after his departure over 20 years with Blind Guardian. Later on he was replaced by Thomas Kelleners, founder and current drummer of the German progressive melodic rock band Blacklands. In 1988 Heavenward published their first demo called "Into the Light", which became a little sensation due some German magazines. In the same year the band separated from Wolfgang Jansen and found in Stefan Kessel the perfect replacement. In January 1989 Heavenward published "At first nature ...", their second demo, which received great praise and triggered true storms of enthusiasm worldwide. During 1989 Bernd Gröters were added as second guitarist and now they started recording their first album.

But the recording took longer than expected so the album wasn't released until 1991. Now 22 years later the band re-released this album in December of last year. It's  always fun to  hear updated versions of older songs. Ok it's not the same, and in most cases the songs sound even worse than before. I didn't actually hear the first version, but this one has some slight crackling going on during the songs. Apart from that, the songs do sound cool. Although not my favorite style i actually could enjoy them.