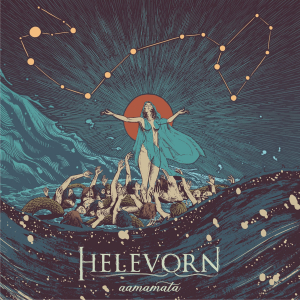 When I think of Palma De Mallorca, I usually see beaches and bars, bikinis and more bars, beaches and bikinis (there’s nothing else to experience out there, you see; and since I do not like beaches, I’ll focus on the bars and the bikinis…). But this Balearic island is also home to Helevorn, a combo that celebrates its twentieth anniversary this year. Happy birthday to you and stuff… No, seriously, Helevorn are a band from the city of Palma, dwelling around as from the very end of last century. Over a period of ten years (2005-2015), the band recorded and released three full lengths (Fragments, Forthcoming Displeasures and Compassion Forlorn), and they toured around the whole of Europe, accompanying combos like Swallow The Sun, Moonspell, Draconian or Saturnus.

Last year it was time to enter the studio once more. The sextet (Xavi Gil-d, Sandro Vizcaino-g, Josep Brunet-v, Samuel Morales-g, Enrique Sierra-k, and Guillem Morey-b) recorded their fourth album, and had it mixed in the Psychosomatic Recording Studio with Miquel Angel Riutort. Then everything got mastered by no one else but Jens Bogren at his Fascination Street Studio. The album has somewhat psychedelic cover artwork (I firstly thought the band evolved into a rather psychotropic Seventies-oriented one) by one Gonzalo Aeneas, and it portrays Sibyl, an ancient Hellenic prophetess. More detailed, Sibyl is like a chantress, singing for drowned beings, and in an extended matter, it does refer to the mortality of all of our lives, I think. And there might be a link to what happens right now, every day, at the Mediterranean Sea, with so many people escaping their former life, but meeting their end eventually in the wild waters… But hey, no politics here…

Aamamata (also called aamamata, without capital ‘a’) is a very varying recording, mainly based on the tradition of Gothic Doom Metal and timeless Doom-Death Metal. First a word about the production. Well, the quality of the sound is top-notch. The result sounds very clean, yet without exaggeration, and the mix is simply ingeniously balanced. From purely personal point of view, I would have chosen a slightly rawer production, but hey, I won’t complain, for this specific style somehow needs a cleaner sound than, for example, a Black or Funeral Doom recording.

The compositions are highly melodious and extremely varying. First of all the tempo changes quite often, be it in an organic way. As you probably know (if not, then you will now), a Doom act plays slow stuff. That’s why people call it ‘doom’, you see. Just joking… No, of course the tempo isn’t fast. But Doom with a constant tempo might get boring, because of the monotonous repetition. In Helevorn’s case there is room for several breaks and tempo changes, varying from slow to even slower at the one hand, or from slow to mid-tempo at the other hand.

Another expression of this band’s varying approach is the structure of the compositions. Some pieces are heavy and overwhelming, others are rather integer and introvert. Most parts are forceful, yet they get interspersed with several acoustic (appearing the whole of the time, yet I’d like to refer to La Sibil-La, which seems to be a reinterpretation of an ancient song from Catalunya, dated tenth century or so) or semi-acoustic excerpts too. Besides the ‘usual’ Metal-oriented instrumentation, Helevorn make use of acoustic guitars, grand piano and (which is not that strange either) a lot of keyboards. And quite the same goes for the vocal aspects. The main voices are or deadly grunts or clean, warm voices. But on top of that, you will also experience spoken words, classical chants and more. And probably I am finally growing up, but the cleaner singing does not bother me at all, haha.

In the very same vein, I have to mention the timelessness of the song writing. At the one hand, there is the tradition of the earlier years. Classic guitar play, old school-based song structures and traditionally performed fragments are one part of the game. At the other hand, Helevorn are not afraid to experience with more modernistic techniques either. No, I do not mean that they inject progressive elements, progressive as in ‘Progressive Metal’. Yet a few excerpts are progressed results of old styled tradition, if you get what I mean.

Some things are worth being mentioned too on top of the details written down above: the use of Spanish (flamenco?) alike strings in Aurora (with a political message anyway); the track Nostrum Mare (Et Deixo Un Pont De Mar Blava), which has lyrical additions in French, Italian, Hebrew, Maltese, Arabic, Catalan, Greek and Spanish (note from the bio: it seems to be a review of the work of Catalan singer-songwriter Lluis Llach and Catalan poet Miquel Martí I Pol); or the vocal contribution of Heike Langhans from Draconian in The Path To Puya.

Released via BadMoodMan Music, a sub-label of Solitude Productions. Available on compact disc, digitally, and on vinyl (self-released).

For fans of: Katatonia, Draconian, Paradise Lost, Saturnus, On Thorns I Lay, Daylight Dies or The Foreshadowing. And why not; I would even refer to Moonspell for some reason…