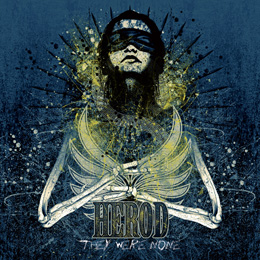 Before getting to the band at hand, let's make it clear from the go, that this is NOT about the US Heavy/ Thrash Metal act founded in Buffalo during the year 2000, which up to day delivered a 2001 demo, a first full-length entitled Execution Protocol on Too Damn Hype Records in 2002, two ensuing full-lengths (2004's For Whom The Gods Would Destroy and 2006's Rich Man's War, Poor Man's Fight) on Lifeforce Records, and whose last “sign of life” came with the 2009 5-track EP The Curse Of The King, issued through Dark Harvest Records.

Nay, THIS Herod is from Switzerland and based in the town of Vevey (situated on the East side of the Lake of Geneva, some 6 km WNW from Montreux), where the Progressive Sludge band was founded in 2011 by guitarist Pierre Carroz (whom can count tenures with the likes of SpyCt, Twisted and Northern Lihts on his past activities sheet). But the idea for the band originated further back in time, during 2006, when Carroz was living in Malmo, Sweden. With little else to do during his free time, than to seclude himself in is empty studio apartment, he began putting together dark and depressing riffs (inspired by the gloomy surroundings and cold Swedish climate) on the baritone guitar he'd brought from Switzerland, and recorded his ideas on a 4-track recorder. After returning back to his home country in 2011, Carroz became acquainted with former Twisted drummer Fabien Vodoz and A Fine Day To Exit singer David Glassey (also formerly of BOD and Crippled God), and together this threesome would go on to form Herod, and write the songs which would later become the material on They Were None.

In late 2012 the band (and I have no idea whether second guitarist Betrand Pot – of Twisted and Last Man Standing fame – was then already added to the line-up) the band went into the Swiss StudioMechanique (La Chaux-de-Fonds) with renowned Swiss producer Julien Fehlmann (whom in the past has been responsible for the great sound of releases by the likes of The Ocean, Coilguns and Unfold, amongst others). The material was then sent ff to Svante Försback, whom you might best know from his work with Rock/ Metal giants Rammstein and Volbeat.

The end result is an album with a crystal-clear sound...although that's perhaps not exactly the good term to use with this type of down-tuned extreme music. With influences stated coming from Breach, The Chariot, Stairland, Cult Of Luna, Switchblade, Converge, Meshuggah, Scarlet, Ion Dissonance, King Crimson, Sophie Hunger and Shora, music fans already acquainted with those bands might get an idea of what to expect, without even listening to the music...but of course it's always better to actually check a band's music before getting into buying their albums, so, by all means, check out the videos posted at the band's own (www.) herodnoise.com. The “music” section there will also re-direct you to the album's page on BandCamp. For some studio footage, check the timeline (homepage) at (www.) facebook.com/HerodNoise.

In the short time since the album's release, the band already played at some Summer festivals (Greenfield, Palp, Rock Attitude), with the Mighty Music Festival in Copenhavn as the absolute highpoint. Dates in the nearby future (up until the end of November) all find the band playing gigs in the vicinity of their hometown, and so I guess we'll have to wait for the impact of the album for the and to step further outwards, and start touring in the rest of Europe! As far as I am concerned, they have my blessing, because I am truly into what they bring on They Were None [even the somewhat different “No Forgiveness For Vultures”, with its first half filled with spoken word done in some Slavic language by an undisclosed lady and with more atmospheric music, and the second part done with French lyrics, by the way (I almost missed that!)...is simply great stuff!], and I'm even goin' as far as to propel the album into my year-lists!