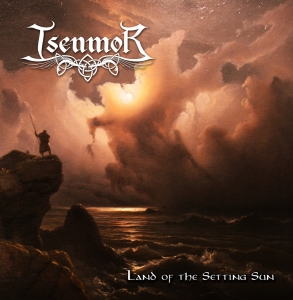 Isenmor were formed in May 2014 in Baltimore by guitarist / vocalist Tim Regan and bassist / vocalist Mike Wilson, shortly after joined by drummer BG Drakeley, keyboardist / vocalist Jon Lyon, and violinists Nick Schneider (also vocals) and Miles Waldman. They wrote and recorded some stuff that eventually would be released on June 21st 2015 the digital way as Land Of The Setting Sun (five songs), and very shortly after (July 3rd 2015) on CD, with inclusion of four bonus tracks.

The EP, as mentioned before consisting of five compositions, that bring a very heavy and epic form of Folk Metal. Since there are two violin players involved, you might guess that instrument is quite important right here. And indeed it is. It gets used not only as back ground instrument, yet as well for several leading parts and even for soloing. Vocally there is quite a variation, with harmonic choirs, brutal screams and clean voices, and about everything related. The stuff is extremely catchy / catching, searching for a balance in between melody and power.

Everything is based on traditional elements, or one might call it being based on clichés. I am afraid the latter is correct, for the result is way too ‘safe’ and too predictable. This band totally lacks an own face, and despite quite joyful songs, it misses ‘balls’. And that’s a pity, for Epic / Black / Folk Metal needs to be stalwart and courageous. This stuff unfortunately is not… Only the title track and the doomy piece So Willingly Deceived limitedly please me; the other ones are disappointing…

The bonus songs, well I cannot say much about it since they were not included in the promo-pack. There are acoustic versions for Pyre and So Willingly Deceived, and two cover songs, for a track from Ensiferum (In My Sword I Trust) and Eluveitie (Havoc).