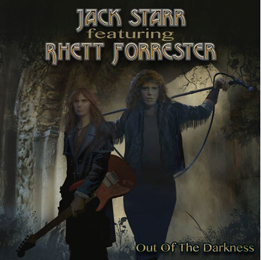 If you’ve been around for a while, you might remember that Jack Starr back in the eighties was a member of Virgin Steele, but quite unexpectedly left the band in 1983, just after they had released ‘Guardians Of The Flame’.

In 1984 he released a solo album ‘Out Of The Darkness’, with Rhett Forrester, who formerly handled the vocals in Riot.  The album received fairly good critics at that time. Now, 30 years later, Limb Music decided it was about time to rerelease this album.  So they had it re-mastered, and added some bonus material from other projects Jack Starr had been busy with, and even some previously unreleased material. As a matter of fact, for music that’s 30 years old, it still sounds pretty good. Of course this has to do with the quality of the music itself, and Rhett Forrester’s vocal performance even before he did this album has also been one of the best in its genre.  So if you don’t have the original album, and you like 80ies power metal, this is definitely something for you.