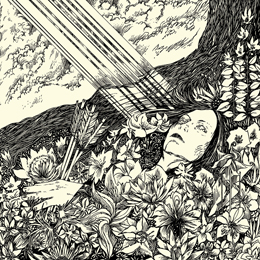 It took quite a while before Wisconsin-based band Jex Thoth recorded some stuff again. The last thing this band did, was the EP Witness in 2010 (review: Concreteweb’s Archives section, posted on 29/09/2010). However, in mean time Jex Thoth toured the globe, performing on festivals such as Hammer Open Air, Tuska, Doom Shall Rise, Roadburn or Rock Hard. Finally the band found the time to write, and record new material. It was done (also mixed) at the studio Avast! In Seattle with producer Randall Dunn (of Sunn O))) / Black Mountain / Earth / Boris-fame) and mastered at Chicago mastering with Jason Ward.

This time the band around front woman Jessica ‘Jex’ Bowen (the only member left from the original Totem line-up, which was the band’s name before they changed into the current one in 2007) worked with session musicians Lori Goldston and Steve Moore from the great act Earth. Blood Moon Rise is the second full length, after the self-called debut from 2008, and it lasts for more than three quarters of an hour. The Retro-Doom still focuses mainly on Jessica’s vocals, but that is a good thing for her voice never sounded as strong and variative as it does now. I am fairly pleased by the opener To Bury, for this song is something completely new and rather unique. It’s a sinister, gloomy ballad-alike Ambient-Rock track with a mostly warm-ritualistic atmosphere. As from The Places You Walk, Jex Thoth’s Psychedelic Doom-Rock brings rather characteristic stuff à la Witness or the self-titled debut. That means slow-paced Occult Rock with elements from the Sixties and Seventies, an energetic vibe, emotional spheres and nostalgic melodies. It’s catchy but not poppy, it’s heavy but not brutal, and it’s obscure but not bleak. And several of the hymns have something that’s rather unique and renewing. I did mention the opener above. The Divide, for example, comes with a droning start, before turning into a ritual epos with sludgy allures. Into A Sleep almost sounds like a loungy semi-ballad, and that calm, integer, even sober approach dominates the better part of the album. This laid-back attitude goes well as background escort. Highlight might be the eight minutes + song Ehjä, which is the most metalized one (the guitars are more on the forefront), but at the same time the most chilly and oppressive song Jex Thoth did do. The Four Of Us Are Dying too is pretty heavy, with riffs that remind me to Saint Vitus, by the way. It comes with a rather funereal atmosphere, and that’s something one cannot but appreciate, not? At least I do. The final song, by the way, called Psyar, is the most guitar-oriented, with a very tasteful grand finale-solo.

For the average quality of the songs is much stronger than any former record, I think Blood Moon Rise is the best Jex Thoth-release to date.