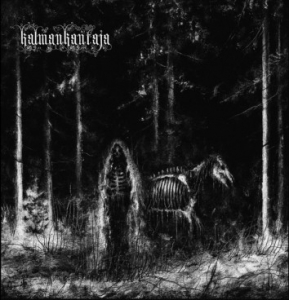 The Bearer of Death… Kalmankantaja is a productive outfit of a productive guy from Finland, Aki ‘Grim666’ Klemm. As musician, he’s involved with bands and projects like Hautakammio, Order Of The White Hand, Lathspell, Oath or Grimirg, amongst others, but he also runs the Patologian Laboratorio Productions label and the Patologian Laboratorio Studio. For those projects and the label, you can find quite some reviews which I did in the past – with pleasure and satisfaction, evidently! I also published a review for this specific band, Kalmankantaja, being for the split with another excellent Finnish act, V-Khaoz – see December 24th 2015. Check it out.

This 666th Kalmankantaja-release was recorded by Grim666 (composer, guitars, bass guitars and keyboards), once again assisted by Malum’s Tyrant on vocals (he also wrote the lyrics), and drummer V-Khaoz, who did co-operate several times before (and also currently or formerly involved with higher mentioned V-Khaoz or Oath, Hiisi, Azaghal, Druadan Forest, Hin Onde etc.). It gets released via Polish label Wolfspell Records on CD (300 hand-numbered copies) and vinyl, as well as via digital sources, and there seems to be a tape-edition too, yet not via this label. The CD-edition comes with an eight-page booklet, totally enlightened by black-and-white artwork and photography.

For the better part, all five lengthy epics on Tyhjyys (they last for more than eight minutes each, with a total running time of almost three quarters of an hour) go on in the vein of all former stuff, standing for very slow, atmospheric and melancholic Black Metal with that depressing DSBM twist. The better part is based on fluttering guitar leads and solos, which carry the structure of most tracks. Sometimes those lead melodies do carry you away into dreamlike worlds of endless nothingness, and hey, you might like that desolate and desperate feeling… Then again, those guitar riffs can be quite repetitive, creating a somewhat hypnotic atmosphere. Supportive and of non-deniable importance is the magic rhythm section, with excellent drum patterns, lovely bass lines and great guitar riffs. These things truly support the lead parts, lifting everything up to higher levels. On top of it, the sore screams of Tyrant at the one hand, and the spherical synth waves at the other, drench everything into a vision so grey and pale.

But more than before, the Doom-Death and Funeral Doom scenes enter the game – a game you can’t win. Especially the harmonious and dramatic melodies of the guitar leads remind me of mostly unhappy Doom-laden Melancholic Art, sometimes almost flirting with a Gothic-like neo-romantic attitude. No, that’s not a bad thing, for ‘gothic’ and ‘romantic’ must be seen from another angel than many, so many (too many) Pop-Doom bands being around lately. For sure here’s a soft-symphonic elegance going on, veiling everything in a chilly, claustrophobic mist. The few Ambient-like intermezzi strengthen that dejecting soberness / somberness for sure.

The Tyhjyys album is not the most spectacular album you will hear, nor is it a classic monument to be. Therefore, the ‘adventure’ is too low-profile. Yet then again, that low-profile attitude can be considered a strength too. There is more space to focus on the essence, the song writing and the performance, as well as the overall atmosphere, and there’s nothing wrong with these aspects. So let’s conclude with: recommended for sure if you’re interested into the rougher side of funereal, melancholic and unhappy Doom-Black Metal.