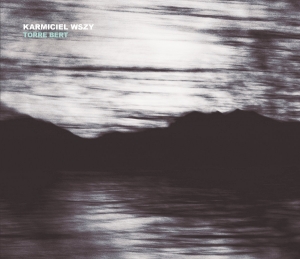 Karmiciel Wszy is a Polish artist / sound composer that recently released a handful of material on labels such as BDTA, Cvlminis, Lighten Up Sounds or Jasień, as well as an album via the impressive Frozen Light label from the Russian Federation. The latter is called Torre Bert, which is actually the name of a non-official tracking station somewhere in Italy. In the fifties and sixties of last century, two brothers picked up so-called space telemetry signals, including vocal samples from astronauts. The question was, and still is, after such a long time: was it real or was it cheating? In each case, many theories were born, and those recordings formed a basement for quite some sonic experiments. The very same goes for this newest Karmiciel Wszy release.

This four-track album turns some of those sounds into a professionally pressed compact disc, which is limited to an edition of three hundred hand-numbered copies. The lay-out by Joanna John is pretty minimal yet fundamentally beautiful, and the album was mastered by no one else but James Plotkin (think: Aidan Baker, Theologian, Dirk Serries, Of Spire & Throne, Stumm, Conan, Yodok III and hundreds of others).

Torre Bert, which lasts for more than forty minutes, opens with Georgi (Dobrovolski), which is the shortest piece, but so unbelievably ominous. It’s a creepy and otherworldly ambient Drone that grabs the listener by the throat. Viktor (Patsayev) initially starts off like a post-dimensional soundwave, a minimal and archaic evocation of obscure rituals, reminding me to some of the chilliest pieces on Hexerei Im Zwielicht Der Finsternis by Aghast, at least sound-wise. The long-stretched drone-scape permanently climbs and descends, permanently taking the listener on a nihilistic trip through the vast emptiness of the Cosmos, towards endlessness and nothingness. With the third track, Ludmila (Tokov?), Karmiciel Wszy go even deeper into anti-matter soundwaves, creating a horrific web of minimal drones and ambient noises, combining the transcendental aspects of nihilism with semi-ritual obscurity from an unreachable, hollow dimension that we can’t experience consciously. Are those vocal samples at the end fake constructions in order to create a conspiracy theory, or is there a real truth going on? Anyway, Torre Bert and with Valentin (Bondarenko?), and this composition differs from the three first ones. Valentin is less minimal and nihilistic, but richer in sound and execution. This track combines haunting synth sounds, some weird sampling, and actually I think there is quite some (older) Raison d’Être going on. This piece is mesmerizing in a warm sense, and permanently arousing, I think.

But as a matter of fact, this whole journey exhales breath-taking mystery, and the essence of the concept, the lost cosmonauts (search the net for more info in case you’re intrigued by such stories, whether they’re true or not), gets fully expressed by the sonic creations of Karmiciel Wszy.