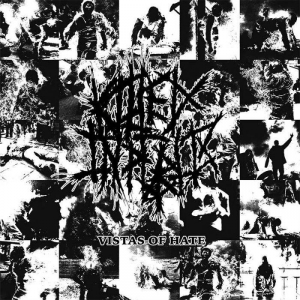 Killed In Public are a duo with a very convinced DIY-attitude. The logo, the black-and-white cover (all people burning to death, publicly executed), and a release on cassette only (FYI: limited to 40 copies only). Hail the underground, one might think.

Underground counts for their Sonic too. Brady (vocals, bass) and Ulf (vocals and drums) create some sick hybrid of Punk, Doom-Sludge and Metal with quite some elements from Droning Noise and Minimal / Death Industrial. Many (instrumental) intermezzos aren’t but an industrialised soundscape, yet one which the connoisseur might surely appreciate. But I’ll come back to the ‘real’ compositions, which are based on ultimately extreme screams, growls and grunts, distorted bass lines, additional noises and Doom-paced drums. Minimal and non-compromising, this is. Raw and scorched, unpolished and rusty, anti-trendy and tormented. The sound quality sucks, and even for this kind of Hardcore-Sludge Metal it is too hard to deal with properly.

Damn, this is a difficult one. I am always ‘in’ for the do it yourself mentality, and I never dislike a production that stands miles away from clinically pathetic would-be sh*t. In this case, however, I think the duo did exaggerate. And what’s more: I do miss inspiration and invention, I think the whole is way too monotone, I notice a lack of self-development, and I can’t barely find anything memorable. Lots of ‘I’, but since I am the reviewer, I need to give my personal (professional / objective) opinion, of course. So, to have this chapter closed: Killed In Public might have the best intentions, but they better focus on writing and composing more cohesive and convincing material before releasing it. Maybe some more adultery will show positive progression, but as for now I am still not persuaded.