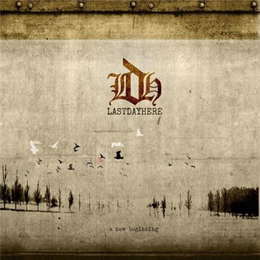 When, back in late 2009, LastDayHere's From Pieces Created was to be Graviton Music Services first release, my editor-in-chief (whom knows some of the people working at Graviton, as they used to work for the German offices of Roadrunner...and him working then at the Belgian offices, you know) had me listen to that album a couple of times during our updating sessions of the website, and I remember very distinctly declining the offer to do the review, because I felt the music was a bit too slick to my taste. The review was eventually done by colleagues Erik and Erik Morren (and their contribution can still be found in the “Archive” section of this here website, posted 23/11 and 20/12/2009 respectively), who had comparisons with Nickelback, Staind and Alter Bridge flying all over the place...with quite some justification, I should add! In other words, to say that I was somewhat prejudiced having to go into this review, is somewhat of an understatement.

During the years in between then and now, the Slovenian five-some (consisting of singer Marko Duplisak, guitarists Jure Gorjanc and Uros Barsic, bassist Tomi Senweter, and drummer Saso Corso) have played on numerous European festivals, and done a couple of tours up and down the continent. In other words, they gave the material of that album a good run for its worth. But eventually the quintet had to settle down, and write new songs for their sophomore album through Graviton, an album which they recorded the “cheap” way, by recording everything but the drums (for which they used a “proper” studio) at their home studio. The album has a couple of guests, with one Martin Janezik-Buco adding percussion to the songs “All I Need” and “Without You”, and the latter (which is the album closing track) also featuring female vocals from a Mojca Zalar.

The end result is 15 great tracks with excellent song structure, magnificent singing, fine guitar work (nice details, I mùst say!), and an incredibly good rhythm section backbone. Songs which will possibly not take long for the fans to be learned by heart. I still wish the review was relinquished to one of the colleagues who're more into the commercial stuff, because personally, I always get turned off by band following a bandwagon. Given, this specific bandwagon is not an all-out easy one to jump on, but if anyone would say that LastDayHere can claim to be the Alter Bridge of Slovenia...say even Europe...I'd tell 'em they are right on the nose!

P.S. : the rating below is a reflection of the band's qualities as musicians, reduced by my personal aversion of more commercial kinds of music. I'd say : make up your own minds as to how you feel about this certainly góód bunch of Slovenian musicians! Those among you who know the band from the previous album (or from having witnessed 'em on stage) and liked the experience, can go and buy the new album without hesitation. Others can possibly find some music off the album(s) at either MySpace, Last.fm, ReverbNation ...you ought to know the way by now...