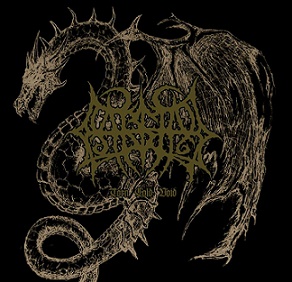 The old English word láðspel means something like ‘evil story’ or ‘ominous news’, and it gets used in the Lord Of The Rings saga. The character Grima Wormtongue calls Gandalf that way, for the wizard only enters the halls of Meduseld in times of grief, despair or war. But that could be basic knowledge for Tolkien-adepts, I guess, so I won’t go deeper into the etymological or literary definition of this word.

Lathspell is the name as well for a Finnish combo, and then I am referring to a great band with some highly experienced musicians in its ranks (being involved with acts such as Grimirg, Seal Of Beleth, Hautakammio, Azaghal, Wyrd and so on – FYI: I did several reviews for these acts, so just enter these bands’ names in the ‘search’-tab to find out what beauty they deal with). The band was formed at the end of last century, and after several demonstrational recordings and rehearsals, there were three studio albums in between 2006 and 2009: Versus Ecclesia (2006), Elegia (2008), and Reborn In Retaliation (2009); the three of them being released via the small and short-lived Excesor Christianorum Records label. After a painful period of relative silence, Lathspell returned in 2014 with another album, Impious Incantations, though it was actually recorded in 2010 (label: Misanthropic Art Productions). Yet still, the band was never put to sleep officially, and during 2015 and 2016 the members entered the Patologian Laboratorio Studios in order to record a fifth full length album. FYI: that studio is owned by bass player / vocalist Aki ‘Grim666’ Klemm, who also runs the label Patologian Laboratorio Productions (PS: a rather small yet enormously interesting underground label with quite some excellent stuff to offer – so are Germany’s Wolfspell Records, the other label involved with this release).

Torn Cold Void is a four-track album, coming in a limited edition (I thought in 200 copies, but I just saw the number 500 on another source), a digipak that gets characterised, visually, by soberness. But believe me: that colourless soberness is part of the whole mystic and obscure identity of this Finnish four-man army. The four pieces last in between nine and twelve minutes, but seen the variety, this lengthy duration never bores at all.

The album opens with I Am Death, which starts with a semi-acoustic melody. That very same melody goes on, after about one minute, yet then again seen, sorry, heard from a much nastier angle. Indeed, quite soon everything turns towards a fast-paced, ultimately harsh and grim form of Black Metal, yet with a grandiose dose of melodic supremacy. The guitar riffs, bass lines and prominent leads bring forth a melodic basement that is both epic and atmospheric. This gets mercilessly supported by fabulous drum salvos (drummer Lima impressed me before with another fabulous outfit, Hautakammio), monstrous leads and solos, and inhuman but simply excellent screams.

This former paragraph sounds extremely positive, but what about the actual performance and the sound quality? Well, that execution, and evidently the related song writing / composing, is of a monumentally high level. It’s an expression of timeless, Scandinavian-oriented Black Metal of the purest kind, breathing the essence of the earlier Nineties, paying tribute to the origins of the European scene. Yes, I’m rather referring to the Second Wave trend than the First Wave, but I did mention ‘Scandinavian’, did I not?! So, do not expect a renewing album, for Torn Cold Void is not. But f*ck that – no, I won’t go deeper into the stupid urge and necessity to be ‘original’. Actually, this album exhales that victorious glory of True Black Metal, the majesty of greatness that gave birth to the worldwide, and timeless, supremacy. But in combination with a fabulous song writing and a unique performance, this just leads to a winner’s instinct.

Also the quality of sound is above average. I’ve been positive, more than once, about the audible results courtesy of the Patologian Laboratorio Studios before, and with this album this opinion simply gets strengthened. There’s a certain rawness going on, an unpolished and even rusty roughness. Indeed, that caresses the scene – what do I say – I mean that it is a necessity, terms to this kind of sonic satisfaction. But the balance within the mix is truly above average. No hollow elements, no unnecessary noises, no denigration of any instrument involved… Seriously, this production fits to, and strengthens, the final result.

So, if you like it harsh and intense at the one hand, yet quite epic and melodious at the other, you… No, what a silly conclusion. In short: a must, once again! Lathspell are majestic!