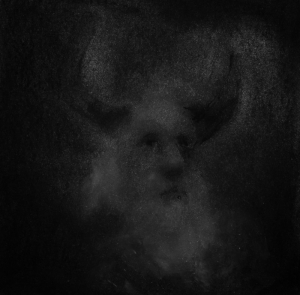 Next year French act Maïeutiste will celebrate its tenth anniversary, but throughout all those years, these guys have not been that active at all. Now, nine years after their formation, they finally come up with the nameless debut full length album, which gets offered to the (grateful?) audience by the sublime French label Les Acteurs De L’Ombre Productions. The recording session took place as from 2009 up to 2014, with recording and mixing assistance of Ari Lausseur. The result consists of eleven songs that were eventually mastered at the Hex Memitim Studio.

Like quite some bands on this French top-label, Maïeutiste too do not perform the ‘usual’ kind of (Black) Metal. For more than five quarters of an hour (!), this band brings a progressive combination of different Black Metal approaches and related genres.

After a four-minute introduction (an instrumental piece based on slow and heavy riffing, progressive structures and discordant melodies), a first chapter starts (the album sort of is ‘divided’ into several parts), called Eveil, teaches us not to underestimate the heaviness of these guys. This material, or at least the better part (…in the mirror… and Reflect - Disappear), brings a blend of raw and fast Black Metal, slow-paced and sludgy sonic force, progressive Post-oriented injections and hypnotic rituals. I’d like to come back on the latter, the ‘hypnotic rituals’. A creation like Purgatoire, for example, starts with energetic drumming, soon followed by a mixture of trancelike voices, additional percussion, eerie synth sounds and suffocative haunting chants, while the second half of this song is based on acoustic guitars and droning cello lines.

The same goes for the other chapters. Chute starts with The Fall, combining elements from timeless yet raw Black Metal with the experimental side of Post-Rock / Post-Metal modernism, but in such a fluent, transparent manner. It’s quite difficult to comprehend after one or two listens, but give it a try for a couple of times, and you’ll notice the intelligent creativity and craftsmanship that defines this post-modern yet, at the same time timeless aural journey. The multi-disciplined and multi-dimensional result shows an eerie state of mind when thinking about the moments of song writing, but who am I to blame the mental forces behind these compositions. There is so much to experience, but open-mindedness and intelligence are needed to appreciate Maïeutiste the way it is meant to be comprehended.

And so the album goes on the weird, eerie way with the third chapter, Elévation, injecting elements from funereal Doom-Death and Drone (Lifeless Visions), Progressive (Death To Free Thinkers) or Shoegaze (cf. the instrumental piece Annonciation), and with the all-covering final piece Death To Socrates, which combines about every element that appeared before on the album.

Oh yes, a couple of additions:

-) sound: great (somewhat rough, yet professionally mixed and fully focusing on the final result rather than the individual players)

-) lyrics: those mentioned are just crazzzy, based on calculations or stipulations, if I am not mistaken, by the Macedonian mathematician and astronomer Claudius Ptolemaeus

-) artwork: bizarre cover drawing in charcoal and inner-sleeve paintings based on stellar constellations, strengthening the link to the Ptolemaic approach I just mentioned