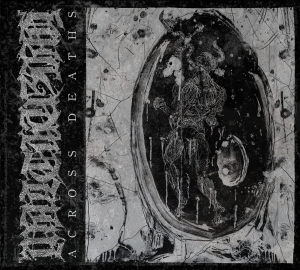 I do remember that I did end my review for Malthusian’s debut demo (which was called MMXIII; (*)) with: ‘I NEED MORE! When can we expect a full album? SOON, I hope!’ Okay, to be honest, I did not remember this anymore – I just read it again a couple of minutes ago – but that is of no importance, haha. But I did mean it back then. I was craving for more, much more. Apparently, this Irish band had an EP in 2015 (Below The Hengiform, also via Invictus Productions), but it never crossed my path, unfortunately. I will surely search for it.

My enthusiasm has to do with the specific style they perform: a mixture of Death, Black and Funeral Doom Metal, if you want, ultimately obscure, oppressing and grim in atmosphere. Ævangelist, Mitochondrion, Bölzer, Temple Desecration, Agos, ZOM, Grave Upheaval, Portal, Dead Congregation, Disma, you know; it is a sub-genre that has so many faces, and so much to offer. Okay, this isn’t but a personal, and therefor subjective, opinion, but those who share my enthusiasm must pay attention: Across Deaths has been released recently!

‘Malthusian have been a study in trident refinement and maverick poise. No move is ever out of place, nor any possibility unexplored; chaos may be waiting in the wings, but it is resisted and never fully / remotely sought.’ Yeah, I told you… This quartet, with (former) members of e.g. Abaddon Incarnate, Mourning Beloveth, Altar Of Plagues, Conan, Wreck Of The Hesperus or On Pain Of Death, returns with five tracks that, all together, clock a good forty minutes. I adore the artwork, though I do not know who created it, but the intense and compact visuals do surely fit to the aural result, which is called Across Deaths. Distribution: Dark Descent Records North America) and, once again, Invictus Productions (rest of our sick globe).

The album reflects what the band did promise with their demo, five years ago: becoming a morbid entity to reckon with, a monstrous collective that does not take prisoners. Their organic mixture of old styled Morbid Death / Doom-Death Metal, barbaric Black Metal, and cavernous Doom malignancy once again has been created (written + performed) with a professional craftsmanship of the highest level, and an attitude that f*cks you deep inside your skull. The variation in tempo is like a constant game, twisted and teasing, but throughout the whole sonic journey, the sheer brutality and claustrophobic evilness remains a constant. Bestial outbursts interact with almost funereal decelerations, permanently inhibiting eye for detail. And that’s the beauty (or one of) about this release: because of the many details, the huge amount on layers, this listening experience does not bore, even after ten listens. It sucks the life out of you, and it tries to confuse you, to torture you, to make you mad, but in a masochistic way you cannot get enough of it. And what to think about, for example, those distorted strings (cello? viola? violin?) in a composition (yes, ‘composition’ and not ‘song’, for this is greater) like Primal Attunement – The Gloom Epo?

Another great aspect is the balance in between the technical and the right-in-your-ugly-face aspect. The latter stands for the thick, foggy rhythm section, which asphyxiates and oppresses. A bulldozer, a battering ram, a tsunami, you name it; it is impenetrable, impregnable and massive. Yeah, here’s where the Old School erects its deflowered middle finger. Then again you have those technically skilled elements, enriching the monolithic basement. It is not in the solos and leads only / alone, though these ones are surely played with skilled experience. Yet after dissecting the four epics on Across Death, you’ll find out that there is much more ‘in progress’ than just some hammering, storming, scathing. Skills and craftmanship – I’ve used these words before.

Yet if there is one remark I must share with you, dearest reader, well, I am not convinced about the production. I think that the sound quality lacks decency and elegance. No, I was not hoping for a clean production at all (that would totally abolish this record’s raison d’être). But the result is too flat, too shallow. The final mix does not satisfy and does not totally pay tribute to the individual elements. The sum of all elements, therefor, is missing that last little thing to conclude that Malthusian created the best album from this century.