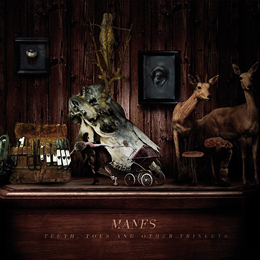 I won’t spend my time on a lengthy, deepening introduction. Check out the .net or the reviews I did on the newest Lethe-album (posted on March 13th 2014) or Manii’s last year’s full length debut (see update January 8th 2013).

Teeth, Toes And Other Trinkets is a kind of compilation, an anthology of previously unreleased and / or alternate versions from the band’s archives, reshaped for our ear drums’ pleasure. Though, that ‘pleasure’-element is very relative, for this compilation consists of material from Manes’ Vilosophe / How The World Came To An End-era (the 2000’s). Since I am a fan of the nineties-period of the band (up to the grandiose full length debut Under Ein Blodraud Maane), which was inspired by the bleakest sounds of Black Atmospherics, I was extremely disappointed, almost disgusted by the new direction Manes turned into. [therefor: Manii’s Kollaps was from 2012, once again, a top-product if you might believe undersigned…]

Anyway, this collection brings more of the electronic / industrialised direction the band went after the first resurrection at the beginning of this century. It stands for somewhat depressing and nostalgic Ambient Atmospheres, far away from the initial Black Metal roots, yet at least as obscured (though seen from a completely different angle!). If this stuff was done in the band’s earliest years, it would / could (should) have been part of the The Crow soundtrack (the somewhat Gothic-laden motion picture with Brandon Lee) or Lynch’s masterwork Lost Highway, yet still I would prefer the contributions of Nine Inch Nails, Marilyn Manson, My Life With The Thrill Kill Kult and the likes.

Doubtful material, only recommended if you do appreciate Manes’ 2000’s era. Skip it if you prefer their nineties-glory, or the young Manii-project…