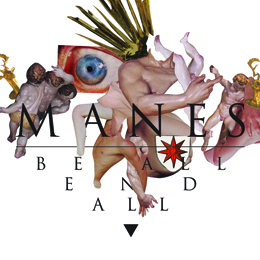 I’ll keep this introduction very short. Manes hail from Norway and released quite differing / different stuff in the past. I was truly obsessed / possessed by the debut Under Ein Blodraud Maane (1998), but the other recordings showed another side of etc… You know, or you do not, but there’s the .net to help you out. Or visit, evidently, this site on the next uploads: March 23rd 2014 for the review on the Manes-compilation Teeth, Toes And Other Trinkets, March 13th 2014 for the Lethe-review (a project sharing an original and still-active Manes-member, i.e. Cernunnos), or January 8th 2013 for the review on Manii’s Kollaps (one of the highlights that very same year!).

The band entered several studios to have this new album recorded, which has a total running time of thirty nine minutes. Once again it’s different from the past. Take the opening track A Deathpact Most Imminent, for example, which combines electronic sounds with Alternative and Post-Rock elements, but created as if it’s a totally new aural trend (and actually it is). As a matter of fact, most tracks are some weird symbiosis of details taken from Lethe, pneumatic Electronics, atmospheric Dark Ambient, New Wave-alike soundscapes, modern Indie, Trip-Hop, Ulver, mesmerizing Trance / Dance, Americana, Bowie, Ewigheim, EBM and Electro-Goth Rock, psychedelic Post-Metal and Post-Rock, esoteric Tribal, Electro-Pop, Alternative Doom, Jazz, the (great) The Crow-soundtrack with hints of Badalamenti, Portishead, and Experimental. Quite an enumeration, I know, but that’s indeed what Be All End All stands for. And even more than that. And less too, at the same time.

Be All End All is an overload on emotions, on perceptions and interceptions, on influences and injections (without the needle?), floating in between all dimensions that trespass superficiality or boredom. But a condition is that you need to open your mind to let this stuff penetrate your notions of ‘Music’.

I am not sure what to think about it, and I wonder why these guys are still on Debemur Morti Productions’ roster. For sure it is dreamy, not of the nightmarish kind, and quite psychedelic, experimental and unusual. And no, it has almost nothing to do with Metal, and certainly not with Black metal à la the Manii-project or Manes’ debut Under Ein Blodraud Maane.

But actually, you know, you might appreciate this material. Whether you are into Metal, Electro, New Wave or alternative Rock – the idea of a possibility that you find something intriguing isn’t that stupid, you know.