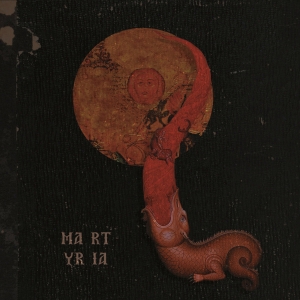 Malignant Records are such label that often (actually: most of the time) come up with something that deeply inspires and surprises. Actually, I have not ever been disappointed by any release, though I have, since I am a human being (or at least I am trying to act like one, from time to time), my preferred ones, and that means some lesser releases in my personal opinion, for what it’s worth. But hey, that has to do with subjectivity, something man cannot escape from, of course. Anyway, the label usually comes up with excellent, sometimes even unique stuff within genres like Death Industrial, Drone-Noise, Power Electronics and the likes. But within their open-minded vision on the darkest aspects of the aural spectrum, Malignant Records offers its audience some ritualistic ambience too, from time to time.

Such a surprising release is this one: MA  RT YR IA by Greek duo Martyria. It’s a project that consists of George Zafiriadis (vocals, didgeridoo, synths, Ozark harp) and Lena Merkouri (vocals, percussions and wind instruments), adding yin and yang, male and female, night and day, the opposite things that search for equilibrium. It’s like a forty-minutes sonic ritual which signifies ‘the arrival of a vital new entry into the world of Ritual / Dark Ambience’. The album comes in a six-panel digipack format, which is a visualisation (and sonic expression) of the duo’s eschatological concept. As from 2015, Lena and George are like focusing on the primal aspects of man’s mental / psychic state of mind, its origin and nature, and its destiny. With this album, Martyria try to achieve ‘the right atmosphere which will help […] to explore our inner world’ by processing spiritual / ritual knowledge and consciousness. ‘Darkness is the power of the most intense feelings a person can experience’, and then we’re referring to the manifestation of melancholy and pain, loss and loneliness, mental emptiness and depression, and the inner-emotional craving for death. Though a mystic, mythic, mysterious and even mythologically inspired way (hey, they are from Greece, as said…), they channel their ceremonies into five different, transcendental rituals.

This debut album opens with Logos, a first step into mental awareness, I suppose. It starts quite esoteric, with bells, followed by floating-droning elegance, before mystical, even sacral female voices enter (and male chants at the background). Soon some tribal percussions open the gates towards atavistic dimensions of proto-religious worshipping. In a way, it reminds me of some Dead Can Dance’s world-tribal from the late Eighties, for what it’s worth. Anyway, this opening piece is sort of enriched, coloured, conceived, by a tribalistic and shamanistic touch. Enter Pneuma, that with those opening didgeridoo moods directly continues that primary feeling of old. Different traditional percussions, esoteric voices, throat singing and mouth harp are selected for this hypnotising ride through solacing unconsciousness, initiating some rite to enter a deeper dimension. As from Nekros, everything seems to turn more occult, obscure, ominous. Nekros is like an asphyxiating drone, like Lovecraftian Dark Ambient, dreamlike and, at the same time, scarifying – the inner eye showing an apocalyptic vision of what might lurk beyond. It’s an intense aural experience, this wonderful piece, with its post-industrial melodies, expressed by creepy, mesmerizing soundwaves and slowly pounding, suffocative drums. Nyx, the fourth chapter, goes on within that very same spooky vein. We’re waiting for a vile entity appearing from the subterranean spheres, a ghastly spirit being evoked. But after a short while, the atmosphere evolves into an esoteric, levitating atmosphere, even exotic. Just wonderful are the hypnotic drums and sacral, post-dimensional layers of synth and wind instruments that appear after about half of the track – oh so beautiful this is! The album ends with Eschaton, the longest epic with its 12:20 minutes of duration. Sounds, field recordings and samples, followed by hymnic, tribal chants, give a first glimpse of the final chapter of Martyria’s first sonic expression. The symbiosis of vocal and instrumental waves is, at the same time, hypnotising and eerie. It develops the whole of the time, in a rich palette of sounds, noises, sonics and aural experiments, before ending, eventually, into the depth of endless nothingness, at last…

The Martyria album has a lot to offer, though it does need some listens before getting the whole. It is an abundant, sumptuous but defiant challenge for man’s senses, twisted / twisting at the one hand, meditative at the other. A great debut by a young duo, and highly recommended!