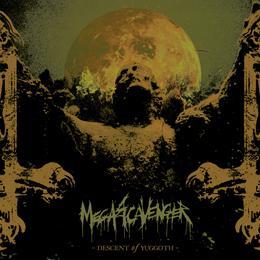 There he is again, with another new project. I’m talking about Roger ‘Rogga’ Johansson, probably one of Sweden’s most active musicians within the Death Metal scene, known from tens of bands and projects, like there are: Carve/ Paganizer (check out the review on the upcoming re-release of all former Carve material under the Paganizer moniker very soon), Those Who Bring The Torture, Demiurg, Necromicon, Revolting / Bone Gnawer, The Grotesquery, Insision, Ribspreader, Ablaze My Sorrow, Swarming, Bloodgut, Killaman and so on, and so on… With this new project, he debuted about a year ago with the EP Songs Of Flesh (Part I). Unfortunately I had not been able to hear this stuff (yet), but both tracks appear on this full length too, luckily. …better too late, than never, not?!

More than once, Rogga did work with other famous names from the international Death scene, and this time it is not different either. What to think about guests like Dan Swanö (Dan and Rogga play/ played together in several bands and projects, as guests or session musicians, or in the permanent line-up; besides, Dan did the studio work, i.e. production/ mastering/ engineering/ mix for several recordings Rogga is/ was involved with), Marc Grewe (Morgoth, Insidious Disease, Comecon, Power Of Expression), Jonas Lindblood (of Puteraeon fame, a band Rogga did work with as well as guest musician), Paul Speckmann (Master, Krabathor, Martyr, War Cry, Abomination, Death Strike etc.), Jörgen Sandström (Krux, Entombed, God Among Insects, Vicious Art, The Project Hate, Corpse/ Grave, Torture Division a.m.m.), or Dutch colleagues like Patrick Mameli (Pestilence, C-187) or Eric Daniels (Asphyx, Soulburn)?...

Above, it is a rather long introduction for something I can be very short about: if you like mister Johansson’s other outlets, you will for sure appreciate this one too. Megascavenger is another Death Metal project based on Sweden’s Old School,  with the typifying riffs and structures, the characteristic sound, and the known brutalising elements. Isn’t there anything new then? No, it might be slightly different as well, again. In comparison to many of Rogga’s bands and projects, this one has something unique too. I’m not only referring to the mostly pounding-doom tempo, yet some melodious leads are likewise apart. Opener “Nihilisticon”, for example, surprises with a couple of those post-modernistic guitar riffs. The atmosphere too is more mysterious and oppressive than many other projects - no horrifying veils of gore and blood-spilling, yet rather murky and misty. And a huge ‘bravo! bravo!’ certainly goes to all guest colleagues!

Anyway, this material is very kindly recommended if you are a R. Johansson amateur/ connoisseur!