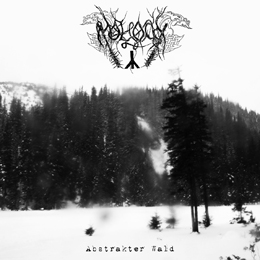 One of the most productive guys from Ukraine is Sergiy Fjordsson, who’s the guy behind projects like Moloch, Silver Sphere Moon, Saturn From Essence and Psilocybe City Life. He’s involved as well with Deviator, thought rather as permanent guest. Besides, he acts as guest or session member in tens of other bands and projects, he takes care of mastering for lots of releases, he does the photography and the lay-out for numerous albums, as well as paintings and logos, and he’s the guy behind the very active label Depressive Illusions Records (actually he founded it as De Profundis Records). And still he seems to have the time to record and release so many releases under the Moloch-moniker…

In 2010 Moloch self-released the album Abstrakter Wald in a limited edition on cassette. It was sort of re-done in May 2012 via Glorious North Productions, once again on tape, and re-issued on CD in late 2012 via his own Depressive Illusions-label, in co-operation with Glorious North. This specific edition came with two bonus songs. And now Metallic Media re-release that material, with another additional track.

The initial recordings were based on so-called field recordings, done at the end of 2010 at a live happening in the mysterious Carpathian Mountains, and this under hard circumstances, i.e. a temperature of -10 degrees (Celsius, to avoid hilarious confusion). The five tracks, entitled as Abstrakter Wald I up to Abstrakter Wald V, were initially released immediately after this live ritual as live-demo-tape by Moloch (see former paragraph). They stand for naturally-floating, desolate and minimal Ambient melodies with an oppressive and sad atmosphere, focusing on introspection and Nature in its purity. The long-stretched ambience has quite a satisfying sound, despite the primitive recording conditions. It’s not that easy to stay concentrated whole the time, yet then again I would rather describe this material as background music than prominently-active stuff. But it never bores, despite the minimal approach and long character.

This edition also consists of Abstrakter Wald VI up to Abstrakter Wald IX, which are recordings from a rehearsing session. They are, of course, in the very same vein with an equally adapted sound quality and a comparable desolate atmosphere. These mesmerizing soundscapes breathe the essence of elementary and essential Minimal Dark Ambient once again.

Wo Die Winde Für Immer Weinen and Berge Umhüllt Von Uralten Nebel are taken from the split-CD with Tomhet (the one from Canada) (note: for that split, the titles were done in English, although I have no idea why Moloch accepted to do so; but that’s of minor importance). Both tracks appeared on other re-issued editions of Abstrakter Wald too (e.g. the Depressive Illusions-edition). Don’t expect something different, yet I think both these compositions are even more obscure and desolate.

This re-issue comes with a previously unreleased rehearsal track, the piano-version of Stille In Mir. It was recorded live somewhere in a forest at a handy tape recorder. This rather short track is little different, for being played on piano instead of synths, but it comes, evidently, with a comparable darkened atmosphere.