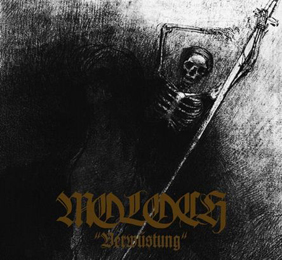 I stopped counting the number of Moloch-releases when I came to number 665, I think (a little voice in my head told me to continue, but somehow …), but Sergiy apparently isn’t about to stop writing, recording and releasing stuff under this moniker. For me, and I guess for most human entities trusted with Moloch’s material, this is a dual evolution. At the one hand, I do appreciate about everything I ever heard from this solo-outfit. Of course I did not buy every single release (just some hands full), but it never truly disappointed me: not the ambient stuff, nor the blackened material. At the other, sometimes I do not know anymore whether I did hear this or that composition before. Okay, it means a certain cohesion and identity, which I cannot but appreciate. But time after time, I wonder: will this be ‘just another’ Moloch release?

That question was my first thought too when I received Verwüstung via Hidden Marly Production, a sub-division of Japanese Zero Dimensional Records. FYI: the album has been released as well via e.g. Human To Dust (on CD), Acephale Winter Productions (tape and digital), Nocebo Records (vinyl) and Metallic Media (CD). I will come back to that feeling immediately, but first some additional information. The album seems to be dedicated to Varg Vikernes, you know, the guy we all love and hate (oh yes, I can’t afford not to mention Burzum), and the music was written and recorded in Winter 2012-2013. Sergiy Fjordsson recorded the keyboards, vocals, guitars and bass lines in Autumn and Winter 2013 at the S.o.h.D. Studio, and he was helped out this time by e.g. drummer Gionata Potenti, one of the most active musicians from Italy (think: Glorior Belli, Manetheren, Handful Of Hate, Frostmoon Eclipse, Deathrow and tens of others). And oh yes yes yes, the lyrics were originally written in  between 2002 and 2006, but translated for this recording exclusively (even partly in Latin!).

Opening piece Todesstille is comparable to stuff in the vain of… Well, I can mention hundreds of releases of course, but let’s stick to the nihilistic, minimal spheres on Abstrakter Wald or Nur Die Berge Erinnern Sich Die Winde Die Hier Ihren Anfang Fanden Vor So Langer Zeit, for example. Blutmond then again is a blackened whirlwind that combines epic supremacy and warlust with old styled Black grotesquery; and with ‘grotesquery’ I am not pushing towards inferior comparisons as in mindless ‘grotesque nihilism’. It’s rather the burzumesque (didn’t I mention the sort of ‘tribute’ to Mister Vikernes…) or darkthronish (don’t try to discuss this – the last couple of days I had the first five Darkthrone-albums played once more in my car while driving to work) kind of nastiness you will experience, and who are you to dislike that finesse and glory? Indeed, that was my point too…Spiritueller Selbstmord goes even further in intensity, and that’s such fine thing. Since Moloch seemed to fade away in rather dreamy yet monotonous Ambient escapes only, it’s truly fabulous to notice that an album like this one goes back to the roots of metalized malignancy too. It’s not that I do dislike the ambiental part; I truly adore the likes of Vinterriket, Winterblood or Sieghetnar, amongst others. But as a Black Metal ‘fan’, I am glad that Moloch come back with quite some sonic aggression too, which wasn’t that evident anymore since quite some time, I think.

Anyway, Verwüstung is a Black Metal piece of art (something else than the many Ambient-oriented releases), that will get adored by ‘fans’ of the True Underground. No matter if you focus on the vocals, instrumental leads or rhythm section, or song structures; it will surely captivate and intrigue! Ave and hail and stuff… But both the first and the (lengthy) last ‘song’ have nothing to do with ‘metal’, but once again: if you are trusted with this project’s material, you might know what to expect; if not, you need to give it a try! Seriously, you need to do so!