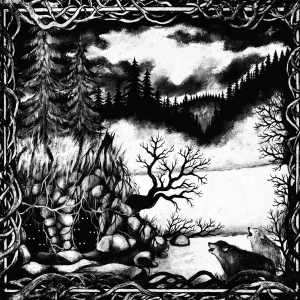 Solo-project by Sergiy Fjordsson, one of the most productive projects on Mater Terra. I did write several reviews before, so check the site for more info. Not this time, just fast forward to the aural side of this Ukraine-based outfit.

Die Isolation, album # 666, mastered at the famous Cage Studio with Martin Bowes – think about other Cold Spring-stuff like Skullflower, Khost, Tunnels Of Ah, Iron Fist Of The Sun or Sol, a.o. Nine compositions this time, having a total running time of fifty two minutes.

Das Uralte Verweilt Dazwischen is the intro, bringing almost two minute of creepy, cold Minimal Ambient in the vein of, well, about one hundred previous Moloch-releases. But then, what a great introduction this is, despite the lack of – whatever; Moloch do not need to be renewing! Then comes Depressive Visionen Eines Sterbenden, bringing another typifying side of this Ukrainian project: raw, primal, slow-paced and minimalistic Underground Black Metal in the vein of Striborg, Vardan, Xasthur, EgoNoir or even the likes of Sort Vokter, Burzum and Ildjarn. It does stand for minimal and quite repetitive low-tuned guitar riffing, hysterical screams, basic structures and rhythms (unfortunately the minor sound quality does not add any surplus to the rhythm section), and above all: an atmosphere so dense, so asphyxiating, so skin-scraping, and so desolate… Me like… Die Isolation indeed is another Black Metal-oriented outlet by this project, with exception of the first and the last piece on it. And when talking about the final track, Abgrund Meines Wesenz, well, that’s a twenty two minutes journey in the vein of albums like Abstrakter Wald or Nur Die Berge Erinnern Sich Die Winde Die Hier Ihren Anfang Fanden Vor Zo Langer Zeit (though being compilation stuff, I have to admit…). It’s a lengthy piece of floating spheres through spiritual dimensions, aurally based on ambient soundscapes and dreamy waves of introversion and desolation (the escape’ish way…).

But then again, I think Sergiy created stronger material before. Die Isolation does not disappoint me, nor does it annoy me, but albums like Verwüstung did have that little more to explore.