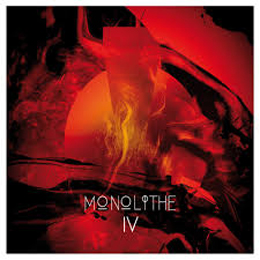 Monolithe are one of Sylvain Bégot’s outfits (one might know him from Anthemon as well; this act originally started as a side-project, but since Anthemon was put to rest…). Besides the main instruments (bass, guitars and keyboards), Sylvain took care of this fourth album’s production too.

In the vein of the former albums, ingeniously called I, II and III (review posted February 6th earlier this year), IV is a one-tracker with a modest length of fifty seven minutes. IV stands for one massive expression of Grimness, Darkness, Misanthropy, Doom and Despair, combining elements from old schooled Doom-Death, Funeral Doom and Dark Ambient. The whole sounds very mystic and mysterious, with an atmosphere that intensively breathes asphyxiation (nice contradictio in terminis, not?). It’s melodic, but not of the pathetic kind (at all), it’s melancholic, yet not of the sweetly-catchy kind, and it’s droning, yet not of the destructurally noisy kind. IV holds the middle of Evoken’s obscure oppression, Ahab’s bleak mys(t)ery, Lycus’s suffocative obscurity, My Dying Bride’s timeless progressivity, Black Wreath’s tragic desolation, Esoteric’s trippy ambience, and Trails Of Sorrow’s catching melancholy. The album is, again, at least as interesting as those comparisons (beware: Monolithe still do not just copy those bands at all! Monolithe have developed and created their own, specific approach!), and the experience is above normality.

IV for sure is a wonderful sonic experience with a nice dose on variation: slow parts interfere with even slower ones (hilarious, not?), pounding heaviness gets darkly connected to atmospherically floating pieces, and epic outbursts nicely interact with autumnal spheres. Therefore this fourth Monolithe-epos is, again, a must for every fan of melodic Abyssal Funeral Doom. Not a possibility, but a must, a necessity, an evidence!