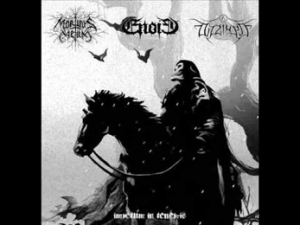 First a remark, for this split has been announced as a Greek collaboration; even within the CD-book gets mentioned: ‘Hellenic Black Metal War …raise the banners…’. So, what’s my ‘problem’? Actually I do not care, but being a purist (I admit: I am a semi-autistic freak…) I have to make this remark. This split consists of three projects amongst which two that hail from Greece indeed, and one that actually is not located in Hellas at all. Mortuus Caelum and Dizziness hail from Athens, the capital of Greece, but Enoid are based in Lausanne, Switzerland. So, what’s the connection? I am not sure, but what I know is that Sergio ‘Bornyhake Ormenos’ Moplat, the guy behind Enoid, plays in Kawir, which are also from Athens, and he guested with Dizziness. But to my knowledge, here ends the Greek connection.

Anyway, Polish label Lower Silesian Stronghold, which I started to appreciate enormously lately (I’d like to refer to a couple of reviews I did, which have been posted during the past months, for full length or mini albums from bands like Winterfront, Dark Fury, Wolftribe or Popravci Vrch), is now to release this three-way split under the Hellenic banner. It comes with grandiose artwork, and the total running time clocks about seventy five (!) minutes.

Impetum In Tenebris opens with five (pretty lengthy) tracks by Mortuus Caelum, a project that celebrated its tenth anniversary earlier this year. The experienced duo (Gareth and Geegor) did record some highly interesting albums before, and they collaborated on some great splits too, with the likes of Hrizg, Winds Of Malice and Diabolical Principles (the latter, by the way, are another, even older outfit both guys are involved with). Mortuus Caelum’s Black Metal is basically influenced by tradition, yet executed with a very own vision and performance. This material sounds occult (cf. the Greek tradition), and is both melodious and rhythmic. Besides, the duo injects its compositions with unique elements. I am not talking about the variation in speed (the main parts are mid-tempo based, with several lightning-fast outbursts and more than just a couple of total decelerations) and structure (including nicely proportioned breaks) only. Mortuus Caelum make use of self-created characteristics, such as the prominent role for bass guitars, the sublime breaks I just mentioned, the typifying sound (rough and unpolished, yet decently mixed), or the intriguing intermezzos. Yet also the ‘normal’, ‘traditional’ pieces are sublime, for just being written and performed with finesse and craftsmanship (cf. the huge experience by both musicians). There is a specific haunting atmosphere that colors the material (coloring it pitch-black, evidently), which characterizes the Greek scene (largely underestimated, I am afraid, but at least as interesting and influential as the Scandinavian one!). And the sound, finally, is better than ever before. This time the roughness gets maintained, yet the result is way less under-produced than it was the case with most former releases. And oh yes, Mortuus Caelum also come up with the Black Sabbath-cover Children Of The Grave. Let’s just say I think it is a very entertaining interpretation of the original… 8,5/10

After Mortuus Caelum come Enoid, a Swiss one-man army that was formed as Organ Trails in 1996 (actually, there was a brief period when Organ Trails acted under the moniker of Pest, yet since there are about six hundred and sixty six bands with that very same moniker…). Bornyhake, the guy behind this project, is a very productive and experienced musician, also involved with the likes of Borgne, Gerbophilia etc. On this split, Enoid bring four re-recorded (?) tracks (a pity that this project’s contribution does not include new material, though it deals with grandiose material). The hateful, misanthropic stuff comes with a thin sound (little too under-produced), with the drum patterns mixed prominently at the foreground, and superb vocals that breathe sulphur and venom, acid and bitterness. In comparison to the material of both other bands involved, Enoid’s Black Metal is the most Old School-sounding, interpreting the mostly underground-focused Second Wave-current with highly melodious riffing and thunderous rhythms. Straight-forward and uncompromising, Enoid’s contribution defines the essence of Old School Tradition. 8,5/10

The Impetum In Tenebris-split ends with four previously unreleased (completely new?) hymns by Dizziness, a band formed at the end of last decade. They surprised with last year’s debut full length Offermort Heritage, and within the very same vein this stuff continues. This material too is focused on old styled traditions, yet with a very epic so-called Nordic-oriented execution. Opening track Marching…, for example, an instrumental piece, could have been created fifteen to twenty years ago by one or another Norwegian act (not ‘just’ one, but a possible example from the great list of majestic protagonists that did exalt the glory of the scene). And as a matter of fact, this goes as well for the other compositions. Even the production is very ‘Nordic’. Dizziness play mainly fast, but with a truly sublime focus on heroic melodies; hymnic leads go perfectly hand in hand with pushing-forward rhythms, and are supported by deep-throated screams, victorious passages (the bathorian way!), and hints of Viking / Pagan supremacy. 9,5/10