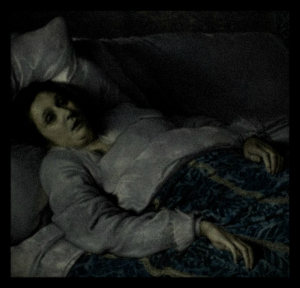 French label Occultum Productions houses many great projects and bands, especially from their home country, yet some international acts as well. One of those is My Deathbed, hailing from Greece. It is an outfit by a human being (I think) named Void, who promotes joy and happiness (completely following the ideology of the label indeed). It is quite a productive project, with almost two hands full of releases in less than two years. The untitled album (or is it self-called?) My Deathbed was originally released by the project itself in very early 2018, and a couple of months later, Occultum Productions and My Deathbed joined forces to have this material released via the contemporary digital sources, on cassette format, and on compact disc.

My Deathbed consists of one shorter and three lengthy compositions, clocking fifty minutes. It deals with the feeling of being abandoned, and the feeling of being lost in your nightmares. I told about joy and happiness, so here you have it. It starts with the title track, which clocks over twenty-five minutes. That piece gives a glimpse of My Deathbed’s raison d’être, and that’s not a happy reason of existence for sure. This very lengthy composition is based on repetitive but highly gloomy and mesmerizing melodies, once in a while interrupted by another melodious excerpt. The whole is strongly guitar-driven, with a hypnotic lead as basic structure. This gets spiced by somewhat ‘simplistic’ drum patterns (pay attention, for this is NOT meant in a negative way; it surely strengthens the nihilistic attitude as meant within the overall concept!) and supportive background strings. And then you have those vocals: wretched, painful, miserable, even hysterical and high-pitched. Within this specific scene – we’re talking about the ‘real’ DSBM (Depressive Suicidal Black Metal) scene, and not some cheap would-be project that feels like joining the trend – the basic structure (the great symbiosis in between melody and iteration) is top-notch.

Forsaken Bodies, then again, is quite a short track (3:50), rather reminding me of a demonstrational rehearsal, yet quite hypnotic once again. It’s an instrumental piece, built around a slower guitar melody and a harsher, also low-profiled string-support behind it. Nothing world-shaking, yet meant as a fine intermezzo as teaser for Nails Deep In Wounds (7:00). The latter is quite different in tempo, for as from the beginning, everything speeds up enormously. Here too the DSBM-glory prevails, yet rather seen from angry, vengeful point of view than self-mutilating one. This is the kind of Black Metal that comes close to the mighty scene from the Nineties, with that sublime touch of Nordic supremacy at the one hand, and still that depressive, saturnine mood at the other hand.

Sleep Paralysis, finally, holds the middle in between the three former tracks. It’s a fourteen-minutes experiment on guitar especially, and just like Forsaken Bodies, Sleep Paralysis initially sounds like an instrumental rehearsing experiment, based on highly melodic guitar riffs and leads. It has something transcendental actually (not like in ‘shamanistic’ or ‘meditative’, yet rather befuddling) and is far less repetitive than, for example, this album’s opening track.

The sound is very lo-fi, getting rid of any form of surgically clean attention. For what my opinion might be worth, this production is well-thought, for is increases the desolate, desperate and negative emotions behind the concept. Nothing more to add on this matter.

Oh yes, purely informative, but My Deathbed released a new album in the meantime, called Mirrors Of Depression I, in digital format and on compact disc.