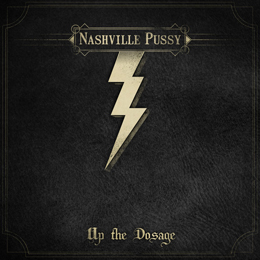 Nashville Pussy is a band that of course I’d heard of before, but never paid any attention.  I thought with a name like that they would either play some indigestible mix of punk and heavy metal, or pure glam rock.

But oh boy was I surprised when I was handed this album to write a review.  This is a metal album, but the vibes it brings with it are that of a punk album.  Imagine the Dropkick Murphy’s, but without the folk and traditional influences.  On the other hand to say it’s a pure metal album isn’s completely correct either. This band is built around a couple, Blaine Cartwright and his missus Ruyter Sluys.  Basically they bring us hard rock, but with a southern attitude.  Think ZZ Top on cocaine, and with a raunchier, and funnier attitude.

As you might guess, I’ll be looking for other material of this band, because I was very impressed by this album.