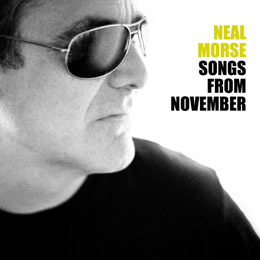 If there's one thing those with a somewhat broader taste for music will agree upon, it's that Neal Morse is quite a personality in the Progressive Rock world. From his beginning days with Spock's Beard (which he co-founded with his brother Alan in 1995, and a band with which he would release 6 increasingly successful studio albums and 4 live ones), to his joining Mike Portnoy (Dream Theater drummer), Pete Trewavas (Marillion bassist) and Roine Stolt (Flower Kings guitarist) to form the supergroup Transatlantic in 1999 (which to date has released 4 studio albums and 3 live ones)...both of which he left during 2002 (after having become a born-again Christian, as he felt the need to convey his faith through his music) for a solo career.

Still, there would be moments when he re-grouped with his friends, Portnoy and Randy George being the most important ones, first of all for his own solo albums (which would be alternating between Progressive Rock and Pop Rock-minded music) and tours, then also for other artists' live tours : first with Portnoy's Yellow Matter Custard during May 2003 (a Beatles cover band which would go on to release a live double-CD and DVD), and eventually also to tour with Transatlantic. In 2002, Neal joined Portnoy, guitarist Steve Morse (no relation, and known from Deep Purple as well as a successful solo career), bassist Dave Larue and lead singer/ guitarist Casey McPherson to form the band Flying Colours, which to date released two studio albums and one live CD/DVD. Neal has also helped out other artists on their albums as a guest musician (2005 actually being a top year in that department, with contributions made to no less than 4 albums – while also releasing three albums of his own, you know!), and donated several songs to a couple of compilation albums which were released to aid the victims of the 2004 Asian Tsunami, and he also participated in recording the ProgAID single “All Around The World”, another project in support of those who suffered from that event.

Neal actually started his solo career while still playing with Spock's Beard, releasing a somewhat normal and Pop Rock geared self-titled album in 1999. To date, and including Songs From November, the man has released a total of no less than 18 solo albums (of which 8 can be classified under the “Progressive Rock” banner), with a new one already planned for release in early 2015. Like, would you say the man is a prolific music writer?

Okay, so...returning to Songs From November...the basic ideas for which were written in a very prolific flood of ideas in November, 2013. Well, first thing I have to say here, is that Neal did things a little bit differently, this time around. You see, he actually went for a slightly different Rock style than he's known for...in his own words (from the info sheet provided by the label), “I listen to a lot of different kinds of music for various reasons...Prog albums when I really want to focus on intricate music...sometimes Jazz and Classical. But then many times I find myself attracted to singer-songwriter albums like a Jackson Browne or Graham Nash record. So one day I said to myself...I'd like to make an album like that!”, a project which he effectively started in November, 2013. Shortly after, Neal was fixed to go on tour with Transatlantic, but when that was ended in March, 2014, he went into the second phase of his singer-songwriter project, choosing to not just bang the thing out with a bunch of studio musicians from his hometown, Nashville, but rather get together with young drummer Gabe Klein, and work on the songs as a team. “He is only 18 years old and amazing! We had a great time recording these songs and many more. We actually recorded twice as many songs as we needed and picked the best ones. It was the first time I've ever done that and it was c-very fruitful. I sent out 21 songs to a bunch of different people that I trust and chose from their lists. So that was also a totally new approach for me.”

Although Neal is also a multi-instrumentalist, the duo nevertheless used some extra musicians while recording the album, these including Chris Carmichael (addition of stings to 4 songs), Jim Hoke (very moody saxophone on 3 songs), Steve Herrman (trumpet on 2 songs) and Eric Darken (percussion on two songs), and additional vocal harmonies were added by Wil Morse (on 4 songs), Regina & Alfreda McCrary (on 2 songs) and Eric Gillette (on one song). The end result is something somewhat different from what one might be used of Neal Morse, and yet also something one can recognize the man's essence (which is, after all, drenched in the Christian Faith) at the same time! Now, in order for you to hear some of that music on this album without leaving the comfort of your PC, I'm afraid you'll either have to check whether the album's already on Spotify, or make due with the 30-second samples usually provided by your trusted online sales sites (Amazon, iTunes...), because neither at (www.) nealmorse.com or at (www.) facebook.com/nealmorse could I find music off this latest album of Neal's. Oh...wait a minute, there's actually a video for the song “Heaven Smiled”, posted at (www.) radiantrecords.com (that being Neal's record label in the US)!

Great stuff, if you're into inventive singer-songwriter stuff with an extra (that extra, in this case, being the essence of what Neal Morse is about)! Not really my favourite kind of music, but stuff I rather regularly find myself listening to anyway (and that, actually, not related to this website, you know...)!