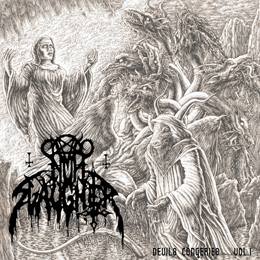 Hells headbangers are so kind to compile, and release, some stuff once provided on vinyl before, by ultra-active entity NunSlaughter. More specific: this first part of the The Devil Congeries series consists of material taken from thirteen 7”EP’s, amongst which some split material and live stuff. …Volume 1 offers you twenty nine ‘songs’ that were studio-recorded, and the same number of tracks that were recorded live and released under the Hell On-moniker. Both parts, the studio material and the live recordings, each sort of fill one of both discs on this first The Devils Congeries-series.

The first disc, as said, contains material from different vinyl releases, kindly offered in between 1997 and 2002. The material is taken from splits with the likes of Bloodsick, Destruktor or Dekapitator, or taken from independent 7”EP stuff à la Blood Devil or Trifurcate. It also includes the Kult material from 1990’s EP Killed By The Cross, which can be considered the seed of All Evil and Nastiness.

The second disc of this double-album brings live songs that were released during the first half of the 2000’s within the Hell On-series. More specific, it deals with the stuff from Germany, Switzerland, Spain, Belgium and France. The sound quality isn’t always acceptable; no, I’ll start this phrase all over again. The sound quality isn’t always like it has been mixed in an expensive studio, but what the Hell On do you care if you’re a fan, no? It’s the atmosphere that counts, and it surely pleases the aurally masochistic audience.

The second volume has not been released yet, but with hundreds of other splits, hands full of other EPs, etc., I do prognosticate more superiority from these nun-slaughtering hordes!