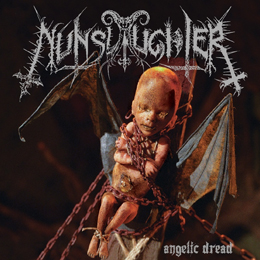 Together with, for example, Sabbat or Agathocles, NunSlaughter must be one of the most productive combos on our lovely planet. As from 1987 on, these guys have recorded hundreds of splits, minis, compilations, lives and full lengths (note: this category, the full length studio recordings, is in fact extremely limited in this band’s case!), so it will be quite a challenge to add the full discography right here. …but of course I won’t… No thanks…

Anyway, the most recent review I did for this band was the one for The Devils Congeries Vol. 1, posted on September 2nd 2013. In mean time (meaning: in between this release and the compilation I just referred at) there were a handful of new live albums and some splits, and in July they release(d) a split-EP with Demonical meant to be a Discharge-tribute (both bands came with a Discharge-cover).

Angelic Dread is a double-recording, with completely new material on disc one. It is, as a matter of fact, the first full length studio album in seven years (!), while the second disc is a bonus compilation with material taken from different split-EP’s done over the past years. The first disc, the one with new material, consists of fifteen ‘songs’ with a total running time of thirty five minutes. But despite their enormously lengthy existence, the trio (Don of the Dead, Jim Sadist and Zack Massacre) sound as if they still are youngsters, seen their energy and drive. The material is in the vein of what the band did since a couple of years. That means that there still are elements from the earlier years, evidently, yet performed with more maturity and professionalism. It’s less chaotic but better structured, but of course it still maintains a blaspheme ugliness that makes many young bands vanish in thin air. Their evolution into rather dark-edged and autopsian Death Supremacy is more convincing than ever before, I think, but I think that the ‘fans’ of this band’s old skool-majesty might be disappointed by the more balanced and structurally deep-thought progression. I do not care, for Angelic Dread truly is a collection of masterly written and performed Death anthems.

Personally I am a ‘fan’ of this band since their Killed By The Cross-EP / MCD (released more than twenty years ago, in mean time), but there has been a permanent evolution; at least that’s what I think. And this trend has not come to an end with Angelic Dread; on the contrary! Maybe there is one remark I simply have to add: the lack of variation. Several tracks do sound little too alike (that is not different from the past; how could they, being performers of about six hundred and sixty six records in mean time?...).

Bon, I need to write about the bonus disc too, of course. This one consists of blasphemous material (sixteen tracks in total) taken from several 7”EP’s (like Noctis, Unholy Hell, Christmassacre or Fuck That Cunt), reworked for this release exclusively. All together: thank you, nun slaughterers! One cannot but being grateful for this extra present, and my respect for this combo does increase by such a brave decision!