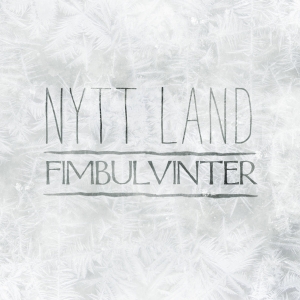 I do not know whether I can call Nytt Land as a side-project of Russian Pop-Folk outfit Ylande, but the fact is that both bands share members. This Russian act was formed not that long ago (2014) in the Siberian city of Kalakhinsk, very close to the border of Kazakhstan. The band recorded a handful of albums and EP’s, independently or via labels like Sulphur Flowers or Crush The Desert, and about one year ago they did sign to Cold Spring Records’ roster for the release of Fimbulvinter. At first, I thought it was quite strange, for that label normally focuses on another specific music(k)al current, but hey, why not?

Nytt Land are a Folk band that continuously evolved throughout the years, inspired and influenced deeply by the Scandinavian / Nordic history. Their songs are based on ancient Scandinavian / Northern themes, and this gets strengthened by the use of both traditional and handmade instruments. The material on this fourth full length was recorded in Summer and Autumn 2016 at the band’s home studio by Anatoly ‘Nordman’ Pakhalenko, Natalya ‘Krauka’ Pakhalenko, Stanislav ‘Iron’ Mandrugin, Vladimir Titkov and Sergey Siltcky, with the assistance of some guest musicians, colleagues from comparable Folk acts, like Eisenslav (Kroda). The main stuff is based on the Völuspá poems (like before, the Edda acts like the main lyrical source of inspiration), though not exclusively, paying tribute to the creation of earthly life and the seasons at first, and winter, represented by the ideals of death and transience for the second part.

(PS: the CD comes as a six-panel digipack, including nice artwork and the lyrics)

In contradiction to Ylande, Nytt Land have not exactly a light, semi-happy and poppy Folk approach, yet rather a ritual, mesmerizing and shamanistic character. There is so much to experience, for each composition permanently evolves at the one hand, and for all epics are so open-minded in song writing and performance. Okay, ‘Folk’ is still a keyword for sure, but this goes further, much further that the acoustic peacefulness of, for example, Ylande. More depth and character, you see…

In the vein of acts like Skuggsjá, Danheim and the likes, yet especially Wardruna, this band permanently create a tension, building up, expressive, transcendental, hypnotic, spiritual, ritual and magical, taking the listener through dimensions of Old, visiting sacred and secret places long forgotten, crossing land of ancient glory, consanguinity and victory – not necessarily of the bloodthirsty kind, yet referring to the pride and coherence of old.

Vocally, the focus lies on female voices especially. These ones, sometimes acting as a sole entity, then again in a harmonious collusion, are truly beautiful, whether they are liked narrative, casting spells, haunting, chanting (with a grandiose vibrato, once in a while!) or shamanistic. But another important vocal aspect is the use of traditional throat singing, which appears more than once too. Fine. From instrumental point of view, Nytt Land make use of different string instruments (like taglharpa, kantele and violin), flutes (tin whistle, tenor recorder), different kinds of percussion, or mouth harp (Jew harp, more specifically), as well as programming and sampling (natural sound, like wind, ravens or howling wolves, as field recordings).

As said, Nytt Land will be adored by those who like Wardruna, Skuggsjá (which shares a member with Wardruna, by the way, along with one from Black Metal horde Enslaved!) or Danheim, but I am pretty sure that those who adore earlier The Moon Lay Hidden Beneath A Cloud, or Silver Sphere Moon, Garmarna, Urban Trad and the likes, will deeply appreciate this newest Nytt Land release!