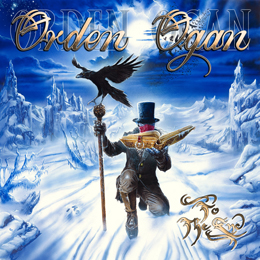 If you buy the limited edition digipak of this album you not only get the CD, but a DVD as well, recorded at Wacken in 2010, who also contains some bonus tracks and a video.  But I only received the CD.

And it must be said, a very good CD it is.   I already liked their previous album ‘Vale’, but I think this albums outclasses it’s predecessor.  This album is rather typical for a Teutonic metal band.  It’s power metal at it’s best,but mixed in you can find some speed metal elements as well.  And just like before the music Orden Ogan brings us, while not being original, is rather complex, and, at certain moments, sounds even a bit bombastic, without having to use choirs or symphonic orchestra’s.

It must be said that Seeb Levermann does not have the power in his voice like Jorn Lande has, but that poses no problem I think.  With some good backing vocals his voice does the trick.  And musically it’s very well played.  And since these are all quite good songs, the album is also very good.

A must-have for fans of Teuto metal, but others shouldn’t faint either, and give this a try.