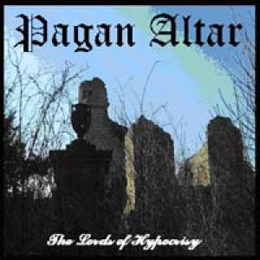 Cruz Del Sur Music are about to re-release all older stuff by Pagan Altar,

Last year we had the re-releases of the compilation The Time Lord and Volume 1 (the latter re-released as Judgement Of The Dead) (reviews done by undersigned posted on December 9th 2012), and there’s also the re-issue of Mythical & Magical (see update 12/04/13, written by colleague Cosmicmasseur). And now it’s time for 2004’s (the) Lords Of Hypocrisy, initially done via Oracle Records. Material from more than thirty years ago, with that typical sabbathesque attitude and pentagramesque execution. Traditional Proto-Doom Rock with an acid-laden atmosphere, melodic and guitar-driven, old fashioned and elementary, with a self-created sound and an own-faced performance, Lords Of Hypocrisy is a must-have for fans of the genre.