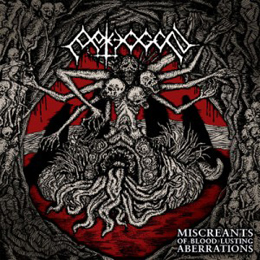 One might not believe it, but there is a very vivid Metal scene at the Philippine islands. That’s the case right now, and it was the case twenty years ago. Unfortunately the scene from that part of our wonderful planet isn’t known at all in our regions, except for underground-traders.

Pathogen are a band from the city of San Pablo, on the northern island of Luzon, that might put the Philippines on the international Extreme Metal map. Earlier this year, the band did release a split with fellow countrymen Toxemia through an Italian label (Human Discount, known for many split releases), so that might be possible to order somewhat easier, and last year there was the release of the band’s third full length, Forged In The Crucible Of Death, through Poland’s Old Temple.

With promotional assistance of Infektion PR, and worldwide distribution licensed by Code7 / Plastic Head Distribution (world, except:), TWS Music (Austria & Germany), Nonstop Music (Switzerland), The End Records (North America) and Deathrash Armageddon (Japan), Germany’s Dunkelheit Produktionen re-issues the second full length by Pathogen, Miscreants Of Bloodlusting Aberrations. The stuff was originally released in 2010 on tape only through an unknown label, and comes now with new artwork. It’s a pity, but it might have been a good idea to flower up the sound a little too, because the production is very low budget-sounding. It is like this material had been recorded in a backyard studio two decades ago. I do not dislike this specific sound, at least when listening to old demo tapes from the early nineties, but for a ‘modern’ product, it is inferior. A shame, a pity.

When it comes to the music, well, that isn’t bad at all. As mentioned before, the scene out there is very active, and the members are very experienced musicians for sure. They do play a US-styled form of technical and brutal Death Metal with a touch of grandness and a flavour of thrashiness, penetrated with the grandeur of the Swedish and Brazilian scene. Despite the fine-tuned performance, it all sounds way too predictable, yet again the performance is technical and fully persuasive.

I give them the benefit of doubt…