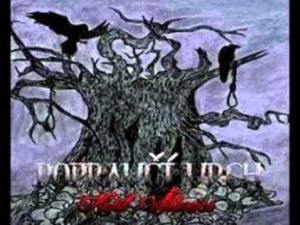 Popravčí Vrch (aka Execution Hill) are a peaceful act from Czech Republic, formed in 2012 as a side-project by Poprava members Kat (v, b), Raborym (d; also known from his current or past activities in bands like Dark Fury [the review on their 2014-album Synningthwait was posted on July 21st; check it out!], Othar, Thoth, Thor’s Hammer or Selbsmord), and Mr. Moon (g). The latter recently left, by the way. In summer 2013, the trio recorded the EP Král Šibenice, which is now available via pretty young yet strongly growing Polish label Lower Silesian Stronghold (the Dark Fury-album I just referred to was released by this label as well).

Král Šibenice, which means something like ‘king the gallows’, consists of seven tracks that are titled I up to VI (plus a bonus track). It has a total running time of twenty five minutes. After the ignorable intro, Popravčí Vrch perform pretty intense, highly oppressive and profoundly traditionalised Black Metal from the Old School, including the glorious thrashing structures, the necessary variation in speed (the tempo interacts in between the extremes of semi-blasting fast and abyssal doomy), and the nihilistic, raw yet perfectly fitting production quality.

No, you won’t experience something completely new / renewing, for this band focuses on tradition instead of progression. Does it matter? It does not in case the quality is acceptable, or more. In this band’s case it is correct to think so. Popravčí Vrch aren’t the most impressing band, but I’ve heard worse, more than once. Seriously, this effort is not that bad at all, and despite the lack of originality, it keeps my attention time after time.