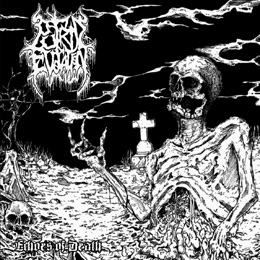 Most extreme bands from Chile pay tribute to the old school, and in Putrid Evocation’s case it is not different either. This young band released some demos and one EP (Blackness Enshroud, 2013, via Chilean Apocalyptic Productions), and now the trio comes up with their debut album, Echoes Of Death. It gets released via Spanish top-label Xtreem Music, of course, and lasts for forty two minutes.

The album opens with the instrumental track Horror From The Cemetery, which is the definition of Old Skool! It’s slow and pounding, nasty and ugly, dark and morbid, both melodious and massive. As from then on, things get even uglier, darker, nastier. Putrid Evocation draw their influence out of the most obscure and morbid spheres from the European scene, with the Scandinavian scene on top. Convulse (this album includes a cover track by them…), Asphyx, Carnage, Abhorrence, Dismember, Purtenance, and why not: Bolt Thrower, Morgoth, Nihilist, Gorefest and Impending Doom, come to mind more than once, and with some open-mindedness (read: travel outside Europe, and please welcome the American supremacy) you might also hear quite some references to earlier Incantation, Immolation, early Death, Autopsy, Goatlord or Massacre.

That’s rather remarkable, because most Chilean ‘Old School’ bands have quite a South-American feeling / sound / approach / atmosphere (there’s nothing wrong with that, of course!), but this one is clearly inspired by the evil sounds from the Northern hemisphere. And they do it with conviction, pleasure and craftsmanship. Damn, what a great collection of primitivism this is! Okay, there are no stand-outs, actually, but each single track breathes that specific uncompromising stench that made the initial scene so smelly – and is that putrid stench not the ideal odour we all want to enjoy all day long? Indeed, I thought so…

Just check it out: great riffing, grandiose deep grunts, a massive rhythm section, and a sound as thick as a fart in the morning fog (oink?); this is melancholy translated into modern times!