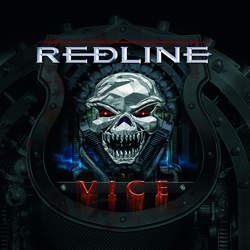 Redline is a band that hails from Birmingham, UK, that judging upon its sound, seems to have it’s roots in NWOBHM.  They were founded in 2006 and so far have released a few demos and one record- under own management. This is the archetype of music that in the eighties would have been highly popular.  These days however I’m not quite sure.  Yet it would be a shame if this band would go by unnoticed.  They produce a cracking sound. To start with: the vocals.  Kez Taylor has a voice that I find a bit hard to place.  At certain times he sounds a bit like Biff Byford (Saxon) but that does not sum it up, because as a matter of fact he’s got a quite unique voice, but a very good one.  Musically it all also sounds almost perfect. I think fans of classic heavy metal groups like Judas Priest, Dio, Saxon etc. will like this album/group a lot.