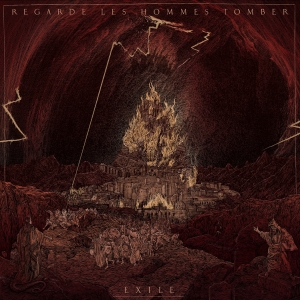 When I got in touch with French top-label Les Acteurs De L’Ombre Productions in very early Summer 2014, I went to my (permanent?) record shop in Leuven to search for some of this label’s ‘older’ stuff. Amongst this material: the album Regarde Les Hommes Tomber by French act Regarde Les Hommes Tomber. In the vein of pretty much all stuff on Les Acteurs De L’Ombre Productions, I was truly impressed by that debut album.

So, imagine my arousal when noticing that the label and the band joined forces once again, and this under the working title Exile. The stuff was recorded in Spring 2015 at the Studio Sainte Marthe with mixer / master Francis Caste (think: Hangman’s Chair, Carnal Lust, Svart Crown, Necroblaspheme, No Return and tens of others). Exile turns out to be a seven-tracker (total running time: forty two minutes), once again with marvellous artwork (by the duo Fortifem; cf. the artwork on stuff for e.g. Cowards, Mercyless, Glaciation or Regarde Les Hommes Tomber’s nameless debut album).

Exile goes on where the debut Regarde Les Hommes Tomber ended. And that is more than just a bold statement. Of course it is rather evident that this second album goes on in the vein of the magnificent debut album. Still we do deal with a grandiose mixture of Post-Hardcore, Sludge, Doom and Black Metal (to keep it simple), searching for the perfect balance in between intensity and melody, in between atmosphere and eternal fog (sorry, but I just felt like going poetic…). But there is something different, something that intrigues me as from the very first time when I listened to this new epic. Exile, and this goes for every single piece on the album, is much more obscure, misty, epic and bleak than its predecessor. For a part this gets caused by the sound, which is truly remarkable: suffocative and oppressive, yet still perfectly mixed in order to pay attention to every actor in this play. But it’s the composing of the songs too that do impress me, even more than on the debut. Exile consists of nothing less but grandiose epics, carrying a monumental sound and an overwhelming atmosphere, based on sublime structures and performed by a mostly convenient execution. There are so many levels within this Aural Art, which sometimes might need several listens to fully explore. And there is quite some variation too, yet without losing any focus on cohesion. So, I do not think I need to go deeper into the subject, for this short statement speaks for itself.

This album isn’t just a recommendation; it is a must!