Removed From This Life 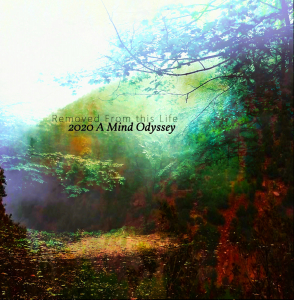 Not that very long ago, I got in touch with the sympathetic guy behind the label Depressive Black Ambient Records. Chris is a dedicated guy when it comes to Underground Music, but this Polish label’s roster too does impress enormously. It has to do with both the highly-qualitative projects involved, as well as the open-minded approach, for it deals with a wide range from Ambient to Noise, as well as some Black Metal projects.

One of the first reviews I wrote for releases on this label was for the album I W Godzine Śmierci Naszej, Amen, released at the very beginning of Summer 2019. It was an album full of contrasts and unusual approaches, but that is exactly what made it so intriguing. So, it was with impatience and excitement in heart and mind, when I did receive the newest effort by this Polish one-man entity.

[quote] Music is very solemn, even monumental. Perfect when we want to rest and move to the heavenly world, which often tears and gets dirty. It's not that perfectly clean. Wounded as our conscience is often relegated to the abyss. Where the mind wins over the heart and we are not satisfied with our actions. This music is a kind of therapy. Such an energetic shot 50 minutes, and we are as renewed as after a bath. Where our mind floated in cloudy water and sometimes sank.

The recording entitled 2020 A Mind Odyssey consists of two ‘songs’, yet it does have a total running time of more than fifty minutes. It makes this effort a harsh one once more, asking for endurance and persuasion at first. But it might be worth it. Of course there is a digital version available, yet the album has been released on compact disc as well (pro-CDr), being very limited (100 copies). It contains a four-page booklet with, to my opinion, overwhelming cover artwork.

2020 A Mind Odyssey (hehe, I wonder where this title did find its inspiration; doesn’t it redirect the whole immediately towards kubrickian spheres of the unexpected?...) starts with the title track, which clocks forty-one minutes (41 indeed). Seen the length of this composition, one might expect the slow ‘building-up’, which it does. It starts of with sampled noises, calm, distant and undefinable, but with a splendid grandeur, i.e. the Gregorian chants at the background, as well as the subtly injected synth-based soundwaves that grow strong and fade away. This introduction mesmerizes and captivates, delving deep into abyssal pits of both sacrilegious and sacred, ethereal spheres. Things turn slightly more esoteric after about seven minutes, when softly-executed layers of keyboard elegance and heavenly choirs take over the vast emptiness of sound. The ‘need to have’, as stated by the label, talks about the listener’s correlation and connection with his / her soul (feel the sense), and that’s exactly what is going on, step by step, when this track progresses. Moments of disturbing monotony interact perfectly well with hidden levels of subtly injected soundscapes, climbing up, then again melting like snow in the sunlight. But the whole of the time, excitement, wonder, revelation and dedication float around. Almost fairylike or angelic, aural waves of prophetic beauty mingle with gloomy melodies and sonic expressions of dreamlike hypnosis. The addition of samples (rain, thunder) does strengthen the volatile nature of physical representation, focusing on the spiritual fortitude. It goes on this very way, organically seeking (and finding) a balance in between expressive determination at the one hand, and unobtrusive modesty at the other. It’s mysterious, introspective and mystic, all at once, with endurance that prevails, eventually, almost therapeutically.

The second piece is called Travelers Of Failure and clocks (only) ten minutes. The concept is alike, yet the execution goes deeper. Mystery and sacrosanctity get translated, canalised through a mixture of enthralling soundwaves (keyboard-laden) and additional sampling, permanently yet subtly growing then again fading. It covers the listener in a blinding mist, not necessarily asphyxiating yet at least gasping for air, as a penitent soundtrack-like expression. Without erring in empty spheres, the enchanting melodies carry an atmosphere both introspective and expressive, both freezing and warming, both ominous and illuminating.