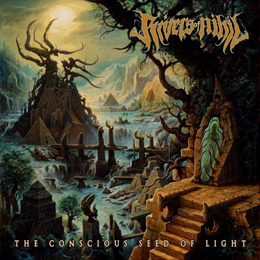 Rivers Of Nihil are a pretty young quintet (current line-up: Adam Biggs, Jake Dieffenbach, Jon Kunz, Ron Nelson and Brody Uttley) from Pennsylvania, formed in 2009. In respectively 2010 and 2011, Rivers Of Nihil recorded two EP’s, Hierarchy and Temporality Unbound, and they shared the stage with band like Six Feet Under, Suffocation, Dying Fetus, Decapitated, Beneath The Massacre and more of this ultra-deadly beauty. In very early Spring 2013, the band entered the Mana Recording Studios (think: In Battle, Exhumed, Cannibal Corpse, Goatwhore etc.) with death master Erik Rutan, and in mean time they joined Metal Blade’s roster.

The band’s debut studio full length The Conscious Seed Of Light has duration of forty one minutes and what strikes me from the very first moments is the massive sound. This, of course, has to do with the recording sessions done in one of the most impressive studios on our rotting planet (Mana Recording Studios, as mentioned before), but as well because of the gargantuan song writing and monumental performance. The band takes inspiration from other American acts especially (think: Morbid Angel, Nile, Immolation or Decrepit Birth), as well as some Polish ones (with Decapitated, Calm Hatchery, Yattering or Behemoth as possible influences), all mixed with a certain Meshuggah-experimentalism. For sure it’s an amalgam of blasting fury, harsh rhythms, violent assault and hyper-speed aggression, created via progressive and technical craftsmanship, and with an out-of-the-box-thinking performance. It also means that Rivers Of Nihil might not be the most renewing act nowadays (at all!), but the total package satisfies.

Recommended if you like: higher mentioned acts, as well as Spawn Of Possession, Gojira, Hour Of Penance, The Monolith Deathcult etc.