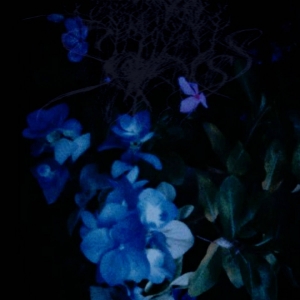 It’s with a huge dose of shame, but I must admit: I have not (been able to) write down my thoughts on the Distant Voices debut for Sadness, Somewhere Along Our Memory…, released at the very end of 2016. In mean time, this re-issue (there was a first pressing via Depressive Illusions, if I’m not mistaken), is sold out, so I need to apologize to the label. Mea culpa, mea culpa, mea maxima culpa!

Why? Well, enter this label’s moniker in the ‘search’-tab and you’ll be able to read several reviews I did for them. And one thing reappears like a constant: my appreciation for 1) the projects involved and 2) the physical content. All recordings come in a (limited) handmade edition, unique and carefully prepared, and that’s quite unique (though there are some other labels that do a same-minded thing). That did count for Somewhere Along Our Memory… too, and for this two-track album too.

Oh yes, in mean time, the label and the project did co-operate once again, resulting in two more albums: Otro (to be released in a couple of weeks) and Tundra, and it’s quite evident that you might expect a review on both recordings too in the (near) future. The same goes for another outfit of Eliza, Left Alone…, to be reviewed and published soon! But first things first.

Rose / Lavender comes in an edition of 57 hand-numbered copies, with two inserts (including the lyrics) and a card, and there was a so-called ‘rose edition’, but that one, being released in only fourteen copies, is sold out too in mean time. The ‘regular’ edition is available with great artwork and layout duties done by Anna M., one of the crew members of this French label, and with beautiful photography by Nathalie Ramirez. It was initially available via the project’s Bandcamp-page in late 2016, but now in its physical shape too…

I reviewed The Rain That Falls Alone…, by the way (posted on March 24th 2016), as well as the album Meadow by Born An Abomination (published on March 29th 2016), another project that involves Damien Anton Ojeda aka Eliza aka E. (and someone else...). This just FYI…

The album lasts for forty-three minutes, even though there are ‘only’ two compositions involved. They are called, indeed, Rose and Lavender. With such title, one might expect melancholy, romanticism, sadness, you know, the gothic-oriented beauty of Music. Those trusted with Sadness’ releases, will know that this comes close to reality. And seen the lengthy duration, one might expect quite some chapters within each song; that too is true.

Rose (16:39) opens with a semi-acoustic guitar, somewhat melancholic and dreamlike actually, suddenly joined by rhythmic drum computer beats (not too overloading, luckily). After almost two minutes, things turn nastier, showing the core of Sadness’ existence: playing atmospheric, repetitive, melancholic and desolate DSBM (Depressive-Suicidal Black Metal). After six / seven minutes, the quasi hypnotic material, with electronic batteries, prominent leads, heavy rhythm section elements and somewhat distant, little hysterical screams, slowly changes into another state of relative tranquillity, referring to the first notes of the song. After nine minutes, everything slowly evolves towards darker passages, exploring the deeper essence, returning towards a quite explosive (mind the harsh drum patterns at almost thirteen minutes) assault, before fading away in some semi-progressive silence. The last minutes, then again, are piano-played, cabaretesque (not of the hilarious kind), and meant to be like a perfect closure to this first piece out of two.

Lavender lasts for more than twenty-six minutes, and starts with that very same semi-acoustic guitar, yet from another level than the former song. It’s a sort of mesmerizing start, quite soon (after one minute) evolving towards higher spheres by those hypnotic ambient guitar riffs. Almost two minutes: turning into a depressive state of mind, with fabulous floating lead guitars and those suffering, painful, mournful screams somewhat at the background (that, by the way, is a surplus, at least to my opinion; DSBM fits best with those yammering voices when not being mixed too heavily on the foreground). Here too slower passages interact with faster ones (once again, the drum computer patterns create that characterising equilibrium in between the impression of slow-tuned and heavily-battering). Another semi-acoustic intermezzo at seven minutes, first tranquil, then totally fading away. Then (after about nine minutes), giving an impression of resurrection. More melancholy-meets-harshness. More changes in tempo and structure. And so on. This sounds quite denigrating, but that’s not the way I want to explain this thing. It’s just quite ‘predictable’ in a certain sense. But does it matter? Well, the f*ck no, it does not matter. Sadness create their own expressive form of desolate and depressing Black Metal, and it does fit within its specific genre. It’s good to have that variation, it’s nice to notice the coherence in between the different excerpts, and it’s at least as nice to notice the organic transition in between them. Okay, it makes it ‘hard’ to endure if you’re not ‘into’ this specific sub-genre of Doom / Black Metal, but adepts of the scene will find out the craftsmanship of Eliza’s writing and performance skills.