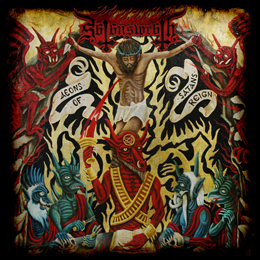 Young Greek act Satan’s Wrath (line-up: founding members Stamos K on guitars and vocalist Tas Danazoglou, with guitar player V, bassist Costa and drummer Nathan Perrier) return with Aeons Of Satan’s Reign, after last year’s Galloping Blasphemy, an album that I did appreciate a lot for its simplicity and honesty (and fun!). Aeons Of Satan’s Reign has duration of 42:28 minutes and continues the path once created via higher mentioned 2012’s debut.

What does this album (and band) stands for? Well, it’s an energetic and up-tempo mixture of Old School Thrash and Black Metal, with elements from Heavy, Speed and Death Metal. It has been done a hundred times before (Venom, Possessed, Bathory, Root, Nocturnal Breed, Bewitched, and this list can go on quasi endlessly), and as a matter of fact, Satan’s Wrath do not add anything ‘own-faced’ at all. But who cares about this, for this act convinces with its DIY-attitude. Thrash’n’Roll is what these guys want to perform, and Black’n’Roll is what you get. And what’s more: the final result is extremely satisfying. The production, for example, is just great. Aeons Of Satan’s Reign sounds full, energetic and professional, but without that irritating cleaned-up tang. Despite the professional sound, the album sounds raw, rough, nasty and heavy-as-Hell. And isn’t that the way we do like it, isn’t that the way it needs to be? Indeed it is. Also the individual songs aren’t just rip-off pieces of any of higher mentioned acts. Despite the lack of originality, almost every single song makes your head bang remorseless. I can’t help it, but I just need to shake my neck ;-). (damn, did I just add a smiley???).

Leather, spikes and bullets; booze, babes and bikes; whisky, cigarettes and more whisky; violence, blasphemy and arrogance! This necrophilia anthem will be on the soundtrack of Lucifer’s burial, and I’ll sing along!