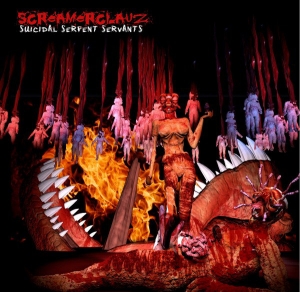 Well, those trusted with Jimmy ScreamerClauz’s Art will have another reason for brainf*ckin’ masturbat*** splatttttering pleasure, for Legs Akimbo offered / offers the naughty audience another expression of this act’s aural (and visual) sickness. The mentally sick amongst us need to pay attention!

Suicidal Serpent Servants was the second release on the label, a three-track 7”EP with explicit artwork (but then again, seen the project’s movies and clips: what else did you expect? If you’ve got a strong stomach, you might check it out on the net; if you’re a heart patient, you are really invited to search for ScreamerClauz’s films, hehe…). It comes in an edition of 264 copies (why not?...).

Side A brings us Shallow Jungle Pools, which starts with one or another sample, based on a distorted vocal line whatsoever, and enlightened by subtle noises at the background. But don’t fear (or better: DO!), for quite soon tortured female screams and, especially, the muSICKal characteristics of this entity take over the journey. Gabberspeedterrorelectronics continue the adventure, mixing elements from Noise, Grindcore and Power-Violence in order to achieve a mostly disturbing, even hypnotic sound. Blast-Techno-Speedcore at its best.

Side B comes with two pieces, little shorter than the one on the bloodied A-side, yet at least as perverted, gore and pornographically intolerable. PPDSPEMFOBBI (which stands for […] Dope Smoking Pussy Eating Mother Fucking […]) totally destroys any form of Techno / House / Gabber effort done in the future, performed in whatever disco-venue whatsoever. Right-to-the-core, this grinding assault makes dancefloors explode mercilessly, with body parts, limbs, intestines and blood crawling all over the place. Got the picture? The other piece, Corpse Sexing (Or Another Track About Raping Dead People That Sounds Kind Of Like The Other One), is at least as frenzy and splattering, with more vocal sampling and Speedcore / Breakcore / Power-Violence alike high-tech nastiness.

So, let’s be honest: no one likes this sh*t. It’s vile, sick, perverted, disgusting; it’s ScreamerClauz in all its glory!

[and in its genre, it isn’t but top-quality!]