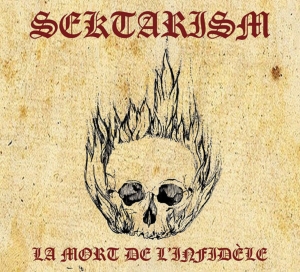 Sektarism are a French horde, hailing from the city of Toulouse (Midi-Pyrénées department), and being formed in 2005. The band released several recordings throughout the years, amongst which some splits (amongst which one with Darvulia), a live album and one full length (Le Son Des Stigmates). The quartet, being involved with the likes of Malhkebre (and Malekhamoves too, to be correct), now return, once again via Zanjeer Zani Productions, with a new full-length studio album, and probably this might mean a bigger representation of their name, for until now, Sektarism was not that ‘popular’ (yet) outside France’s borders. Who knows, we’ll find out soon, I hope. At least, I think this album might be a first step to reach a ‘bigger audience’.

La Mort De L’Infidèle (‘death of the infidel’) gets released on CD (in an edition of 499 copies, a 12-panel digipack which, when folded out, has the shape of an inverted cross), on vinyl (12” LP) and via the digital way, and there’s a smaller label (Sahluqtu Archives) taking care of a limited edition on tape too. The recording consists of three tracks, which are, like usual, quite lengthy. The total running time clocks over one hour indeed, for just three titles. And maybe not ultra-important, yet still: it was recorded in one take, apparently, as some improvised ritual captured in the moment. It makes sense, I think, to my (mostly important) opinion…

Based on religious (Catholic-biblical versus blaspheme-Satanic) themes once again, via La Mort De L’Infidèle, Sektarism are discussing, even dissecting, the truth, and the true meaning, of holy words. Are we sheep or are we wolves? Do we have to submit, or to revolt? Do we lead our own lives or are we slaves? And what’s the truth? What about apathy, self-satisfaction, meekness; what about the mass of pretentiousness, illusions and make-believe. Should we still be tolerant to those false believers and worshippers, focusing on entertainment rather than the glory of the prophet’s father himself? Take this as the band’s manifesto, their concept, their message, translated through heavy drones of Metal!

The album opens with the shortest piece, Ô Seigneur, which lasts for ‘only’ twelve minutes. It starts with some so-called Musique Concrète elements, random sounds, noises and instrumentation experimentation, and after two minutes a conjuring voice enters (in a way I must think about the evocative voices of Eros Nécropsique), accompanied by droning guitar lines and some random percussion sounds. Slowly this structure evolves, and step by step new elements enter. It’s like a summoning of sacral / sacred / secret / … spirits from Subterra, like a slowly-approaching threatening evocation of an ancient demigod. This ultimately heavy droning opening track slowly but convincingly grows, and the experience gets heavier, denser, more overpowering and intense, building up towards a massive droning wall of impenetrable guitar noises and drum patterns, supported by cruel, wretched voices from the underworld. A twelve-minute introduction, quite unseen (or better: unheard), but it surely is a monumental opening sequence, a grandiose initiation passage for much more to come!

Brûle L’Hérétique (‘burn the heretic’) immediately continues within a nastier vein. Ultra-slow, ultra-heavy, ultra-bleak and ultra-massive; this is a mostly filthy expression of somewhat ritualistic Drone-Black stuff, with a funereal, death-laden touch of sonic extremism. Heavily-battering droning passages with hammering guitar riffing and a devastating rhythm section interchange with excerpts of evil-invocating worship, ritual and spiritual madness, shamanistic frenzy, subduction to higher powers, higher energies. You feel it. The energy captures you, as a listener. The sonic assault penetrates your brain. You’re possessed as from now on, possessed or devoted…At about half of the song, you might see some light again, far away, at the end of the horizon, but soon the disappointment will return – or is it a relief, a masochistic pleasure, to get thrown back into the darkest pits of the aural spectrum? I think it’s satisfying (demonic smiley…)…

Conscience, Révolte, Perte Du Moi (‘consciousness, rebellion, loss of the self'), finally, starts once again in a tribal, shamanistically-hypnotic way, with tribal drumming, soon followed by mesmerizing, semi-stoned string riffs. After about seven minutes – this piece lasts for half an hour! – simplistic yet discordant riffs and wretched voices take over the ritual, transcending into a permanently-growing aural danger, brain-twisting or mind-fucking or whatever you want to call it. The noisy improvisatory intermezzo, organically transforming into some sludgy chapter, does not guarantee any mental relief, for quite soon (okay, in such a lengthy track, it means several minutes; more stipulated: after several more minutes, depending on your mood, your intelligence, your endurance, your persuasion, or whatever) you will understand that you won’t escape from your doom. It’s like an omen, it’s as if this album has foreseen a destiny of unhappiness, disappointment, doubt and revolt.

Sektarism are able to concretise their depressing message via this difficult and hard-to-endure album. It does not matter whether their message is what you are waiting for, if you expect the result, or whether you think it’s fantasy. Sektarism anyhow have you focused on our human existence, and the insignificance of our fugacious existence. But Music-wise, this goes further than just ‘a message’. There is a unique combination of noisy-industrialised Drone, Occult Ritual Music and Black Metal-oriented Funeral Doom, and whether you like it or not: it does fit! Seen the length of the tracks, several listens might be recommendable. Though, I think you will soon find out what supreme characteristics dwell beyond. Unjoy!